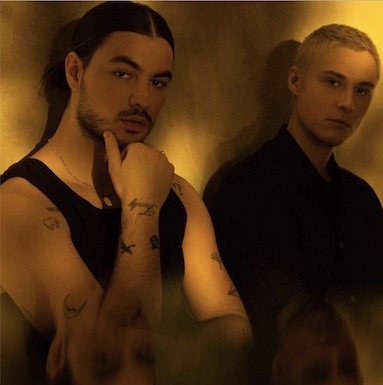 Swedish pop duo JUBËL are back better than ever with their recent drop Weekend Vibe.

It’s an effortlessly uplifting tune with feel good vibes and as always, a switch up from their usual sound.

For Weekend Vibe, we took a lot of inspiration from producers like Bruno Mars, Pharrell and ourselves and just tried to make something fresh.”

The nostalgic video was created using an analogue camera from the 1970s and is definitely filled with serotonin, immediately compelling you to dance along.

This is a strong follow-up to their last massive single Dancing in the Moonlight which was a remake of the 70s classic, and even smashed over 100 million streams on Spotify alone.

The band is made up of Sebastien Atas, who’s the primary producer and lead vocalist, and Victor Sjöström, who’s the key songwriter and instrumentalist.

CelebMix got the chance to chat to the boys all about Weekend Vibe, why they’ve hit the gym for a month straight, and what we can expect from JUBËL in 2021.

Oh, good. I’m well thank you! Now, we’re going to chat about your brand-new single called Weekend Vibes. It was your first drop of 2021. You said it’s mainly for people that live for the weekend – which is the majority of us right now – it’s definitely giving me summer vibes! How did it actually come about?

V: We were just in the studio fooling around having fun actually. Didn’t have any thought about what we were about to create, so we just played around on the guitar and Sebastian came up with the Weekend Vibe lyrics, and from that we just wrote the whole track like, in a day.

The music video felt nostalgic, was there a reason for that? Did you want to go back to old times?

V: Well the music or the song itself has quite retro vibes to it, so we wanted that to like suit the track I guess. And it’s always fun to like experiment with different lenses and stuff on the camera, so we get a retro vibe on it.

S: It was actually recorded with an analogue camera from like the 70s.

V: The one with the film roll!

S: So like, some scenes in the music video didn’t make the cut!

The song is very different to your usual sound and it’s quite a chilled-out song. Was there a reason to switch it up?

S: I mean we always – it’s a bit different from Dancing in the Moonlight – but we always develop and we don’t want to copy ourselves. So, we just want to make new sounds and make things that haven’t been done before.

V: Eventually, it gets boring to just do the same thing over and over again.

S: Yeah, but if people listen to JUBËL, they can hear that there’s like a pattern with the guitars, and my vocals and the production so yeah. Hold on tight!

Speaking of Dancing in the Moonlight, that smashed over a 100 million streams on Spotify alone. Do you expect a song to be that good? Do you ever sit there and go yeah this is definitely going to be a hit?

V: I mean, we always try to make hits but you can never expect when releasing a song…

S: You can only get a feeling in the studio. When we make something that we like, we get the “hit” vibe but, you never know. There’s so many things that need to be in place.

I feel like music is definitely something getting everyone through the year right now.

Tiësto actually did the official remix of that song. Was it a case of he just did it, or did he contact you and say this song is so good I want to work on it?

V: I think his management were in contact with our label and they were discussing that he liked our version and he wanted to do a remix so, why not?

Is there anyone in particular you would like to work with? So, for example, artists or producers. Would you ever mix genres like rap or pop music?

V: Yeah. Actually, we have a lot of tracks coming up which we are searching for or working with collaborations, and we like to mix it up so we could be with a rapper or anything that goes actually. Let’s wait and see.

Obviously there’s a little thing called a global pandemic going on right now. Are you finding it easier or harder to make music because obviously there’s not many events we can attend so there’s I suppose I bit more time?

V: Yeah because we can go out and play and find inspiration from that, but besides that, we’ve just been in the studio working.

S: I don’t feel like we have felt any depression or something because we love being in the studio so it’s easier for us!

Yeah basically you’re paid to do what you love!

If things start to ease up can we expect to see you at any events this year?

V: Well, we have a few gigs planned, we’ll see what happens when the summer comes. But, we just have to adapt and follow the news and see what happens. But we would love to come out and play if the situation allows us to. We’ll see; hopefully we can.

Have you got any festivals you would love to perform at? I’m originally from Liverpool and there is a big festival near there called Creamfields which a lot of DJs attend.

S: We want to go to like Coachella obviously!

V: That would be good.

S: But in the UK, we were on one festival one time called South West Four, in London.

V: That was cool.

Before I let you both go, I just want to ask what we can expect from JUBËL in 2021 because obviously last year was a bit crazy. Is there any goals you want to accomplish, whether it’s personal or not? I know that you [Sebastian] have been a month straight at the gym – I don’t know how you’ve done that because it’s virtually impossible!

S: I want to continue so I can get ripped for the summer! If we’re going to go to the UK, we need to look ripped because everyone there goes to the gym and looks the best they can.

V: We just, erm, a goal for 2021… we’re actually releasing an EP. It’s done now so that’s nice. We’re going to release that and hopefully we can reach number one in the UK again; that’s the main goal!

I think you will do that no problem. Thank you so much for chatting to me. Hopefully I’ll be able to chat to you both soon when that brand new EP is out!

Go check out JUBËL and Weekend Vibe and tweet us over @CelebMix to let us know your thoughts!