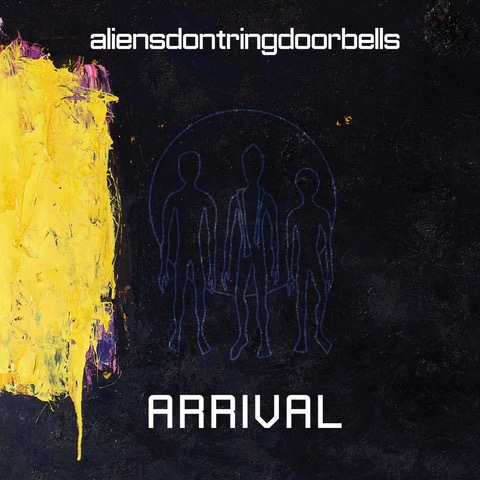 A new band have transported themselves into the music atmosphere and they are an exciting trio called Aliensdontringdoorbells who have released their debut album ‘Arrival’.

Aliensdontringdoorbells are Dorian Foyil (Guitar, Sax and Lead Vocals), Adam King (Lead and Backing Vocals) and Christian Pearl (Keyboards and Backing Vocals). The band’s unique name was as a result of a conversation which took place between Foyil’s (then) six year-old son and an old man on a New York Subway platform. The man then turned to the boy and said “It’s because aliens don’t ring doorbells” and the name was born.

The record begins with the intriguing ‘Slipping Away’ about a girl who gets dressed up to go out so you think you are gonna lose her as King asks the question “How do you keep your girl from slipping away?” Foyil’s fluid electric guitar rings out and dances alongside Pearl’s crisp keyboard and this opening track sets a precedent in terms of high quality.

One key point about ‘Arrival’ is that in terms of the material no subject seems off limits as our audio journey makes stops at paranoia and anxiety in the shape of ‘Consummation’, the feeling of being attracted to someone for the first time in the buoyant ‘The Heart Is In Her Eyes’, the world of being something of a ‘sugar daddy’ in the American blues number ‘Daddy Blues’ complete with a slick female rap solo and I am reminded of the song ‘Bluegrass Stain’d’ on Mark Ronson’s debut album ‘Here Comes The Fuzz’ at times.

Then the feelings of heartache and loss are prevalent in one of the band’s previous singles ‘Story’ with its Take That-esque harmonies and theme of family and ‘Important’ which has Adam King brutally admitting “My heart’s breaking and I wanna die”.

Fans of funk music are greeted with ‘Blind To See’ complete with vibrant guitar and punchy rhythm section courtesy of Kevin Dean on drums and Earl Forbes on bass, both of whom are from the Bahamas.

In conclusion, ‘Arrival’ is an album that features material with themes that people can empathise with and relate to and it is well-executed by gifted musicians and producer Jeff Kanan to create a music adventure for the listener which transports through a range of emotions and sounds.