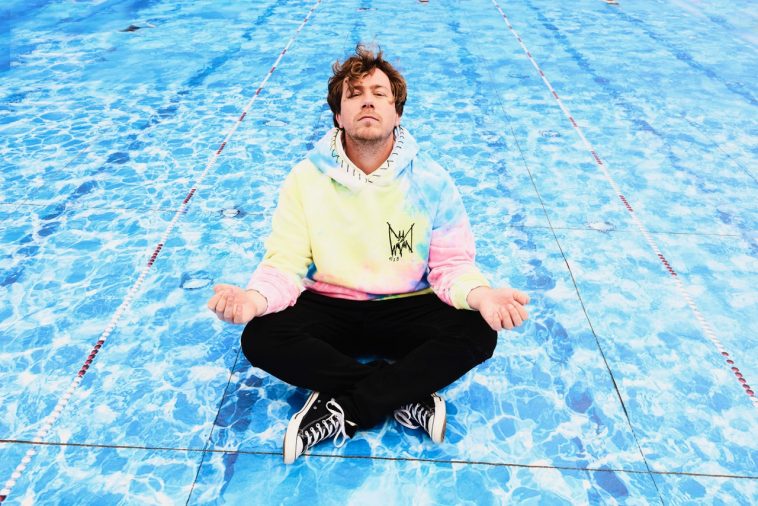 James Bourne has already had a career over the last 18 years which has been nothing but successful. From forming Busted and having a massive 8 UK top 3 tracks, forming Son of Dork and getting a few extra top 10 tracks with them – songwriting for some of the best names in music (5SOS, Pixie Lott, The Vamps and Backstreet Boys) and creating massive West End musicals, his talents have inspired many. Now, James Bourne is embarking on his own solo venture, and today he’s released his eagerly anticipated debut solo single – Everyone is my Friend.

As CelebMix are long term Busted and beyond fans, we jumped at the opportunity to sit and chat with James and get deep into why Everyone is my Friend is so pivotal right now and a whole lot more about how James Bourne’s musical mastermind works.

Hi James, welcome to CelebMix – congratulations on your debut single! We are pretty obsessed with it. How did ‘Everyone is my Friend’ come about?

Really good question. I was singing and playing guitar in the Hollywood Hills with one of my neighbors who is a very gifted song writer – Stephen Bishop (Credits include Phil Collins, Barbra Streisand) – I gravitated towards him one night, and we became friends. Anyway one night we had all the guitars out, we were singing together and I had this verse for Everyone is my Friend, and before I knew it we had finished writing this song together in his house. I had written a song with Stephen Bishop, and I felt so inspired to write the album – and I’ve worked with John Fields (Miley Cyrus, Jonas Brothers, Selena Gomez) for the track and more too.

The sound for Everyone is My Friend is very different to Busted and Son of Dork’s sound as well as your project Future Boy, has that been a conscious decision?

Future Boy and Son of Dork where very conceptual projects, SOD was very Pop Punk inspired by all my favourite drive-thru bands, and Future Boy I wanted to make an album that was really experimental I wanted to create a sound without guitars. But I had never sat down and tried to make an album that wasn’t under a pseudonym. I thought a lot about what songs would I sing you know? Because I feel like I’ve always played a part in those, I’d always try and fit into a genre – whereas solo it’s my own genre. I’ll always love what I have done, but I’ve struck a chord with my own solo stuff. I definitely want to carry on with this.

You have a large and dedicated fan base, so how are you anticipating their reaction?

So far, the few people who have heard it have loved the sound, it’s so encouraging. There will always be a few people who will say ‘it’s not heavy enough, where are the guitars’ everyone has their own ideal world of what my music should sound like. My album has many different sounds and vibes, but it all comes together perfectly to sound like me.

(Update – so far, the fans have gone WILD for Everyone is my Friend).

So, for those who have heard Everyone is my Friend, what has the reaction been like?

They’ve been freaking out in the best way about it. I played it to my parents, and they went ‘oh my God’ and every one of my friends has said they cannot wait to hear it live and I have been so inspired by their reaction.

The song focuses a lot on friendship and giving kindness a chance. This year has been tough on everyone, so do you feel like we just need a bit more of friendship to get us through?

We’re isolated physically, but we more than ever want to be closer to each other. I think Everyone is my Friend brings that across.

James Bourne, you are one of the most exciting song writers of our time, your concepts are insane. How does this songwriting process happen?

With song writing, it always helps if you know what you want to say. Because if you don’t know what you want to say, it’s difficult to get there. I have definitely started and finished songs where at the start I didn’t know what it was about until the middle of the song, but looking back at all the songs I have written, the one’s where I have established what they are about early on. There are no rules for songwriting, everyone has their own methods, and their own ways that work for them. But my method is what works for me.

So, we’ve seen on social media, you have teased this debut album of yours, what can you tell us about it?

There’s a lot of different tones to the album, some happy and some sad. It does build to a very big loud and heavy finish. But they are all routed into being an acoustic live performance, but one is more a live piano performance – it’s inspired by a night out in LA. It was one of the crazy nights where you don’t know where you’ll end up, so I came home and wrote a song about it.

Which artists would you like to collab with in the future?

There was one song on the album – the heavier one I had wanted Travis Barker (Blink 182) to drum on it, but then John Fields drummed on it and it kinda was amazing. There are artists id love to work with, like Yungblud – he’s so talented. I have always liked his stuff. He has a lot to say and I like that about him. I wrote with him very early on – back in the day we wrote a song together. It’s not a song he chose to release, but I’ve seen how naturally gifted he is. I’ve collaborated with some amazing people – John, Stephen for the album and Eric Bazilian – all heroes of mine.

You’ve recently worked with up and coming artist Katy For Kings – as well as 5SOS before they broke out and many many more artists. Is this something you have a passion for?

Katy is a superstar! It’s always so exciting, it’s like finding something new, and you get them all to yourself before the rest of the world do. With Katy she was brand new, an uncut gem. Before you take off and get streams and the industry fight for you, you get that calm. I remember at the beginning of McFly, writing songs in my bedroom with Tom. There was no band at that time. It was such a special time, as we were writing the most amazing songs, just nobody knew about them yet. I’m always down to find someone unknown.

‘Eveyone is my Friend’ is impeccable, we are obsessed – but what’s coming next.

I have another single (it will be announced soon) and then there will be the album that follows. There is one song that leads straight into a second album, like a bridge.

Lastly James Bourne, for all our readers who still haven’t heard ‘Everyone is my Friend’- why should they listen to it!

Its a feel-good song. As I said, where we’ve all been isolated it’s a song that can bring us together. It’s got the vibe of today’s sounds.

If you are needing that feel good song, to bring you positivity – Everyone is my Friend is the song for you. You can stream the track now from Spotify and Apple Music. Also keep up with James Bourne by following his Twitter and Instagram.