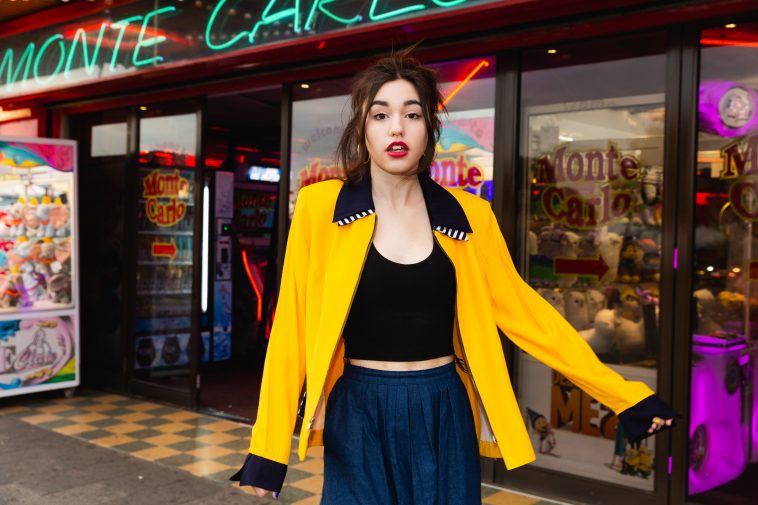 Last summer Katy For Kings captivated us when we heard her voice during Emily Canham’s ‘1 Hour Song Challenge‘ video (Katy co wrote the song along with Emily and James and Chris Bourne). The talented singer songwriter also has the likes of Maddison Beer cheering her on loudly and proudly – And today – finally, Katy released her debut single ‘Words Around’.

‘Words Around’ is the first single from Katy, released everywhere today. Whilst we have been obsessing over the song, we also have caught up with Katy, to get the low down on everything from how One Direction influence her, the low down on creating music, and all about the future!

Hey Katy, congratulations on the single. You’ve already had an amazing start to your musical journey (Madison Beer loving your cover and working with BBC Introducing) but where did it all begin?

I have been singing for a while, the talent competitions were my favourite part of our family seaside holidays and I’ve always loved the theatre. I was involved in amatuer dramatic groups from the age of 7-13. I even got to play one of the Von Trapp children in the adults production of “The Sound of Music” and then Swallow in “Whistle down the Wind.” It was a really big deal for me and I’m especially grateful for those experiences. I picked up a guitar the year after. The first song I learnt was “Hey Stephen” by Taylor Swift and I sang it at an open mic with my sister on the cajon. I was so nervous that someone else had to tune my guitar for me because my fingers couldn’t find the right strings.”

Your debut single ‘Words Around’ is incredible – we love the carefree summer vibe – Can you tell us a little more about the song?

Thank you so much! Words Around is all about learning to trust myself as an artist. It’s about taking that first leap of faith and saying “Think whatever you like, I’m going to do it anyway.” That’s why it feels so right for a first release. It’s my way of welcoming the opinions and the criticisms that come with a career in this industry and it’s cushioned by funky guitar parts and trumpet sounds that aren’t really trumpets. I love it. Is it weird to say I love my own song?”

It’s not weird at all, as we love it too. Where did the inspiration come from?

I was sitting on my sofa trying to learn the chords to Still Feel Like Your Man by John Mayer as I’d seen him in concert a few days before. It was one of the best nights of my life so far. I was so inspired. I stuck a capo on and started singing about the most random imagery I could think of like a river with a spine and talking trees and then I thought to myself “If my high school english teachers could hear me now they would laugh and shake their heads, none of this makes sense!”

Who would you say your musical influences are?

Along with John Mayer and Taylor Swift I would have to say Kacey Musgraves and Harry Styles. I’m a massive One Direction fan. I went to their Take Me Home tour and I wore a top that says “Harry loves me.” I like to think he waved at me twice because of it. I even wrote a song about them called “Fangirl” . I did their iconic dance moves in the music video and everything, but that’s buried in my mum’s hard drive somewhere. My dad has always listened to a lot of The Beatles, Rolling Stones and Fleetwood Mac so those too.

Because we can’t get enough of the track, can we expect an album/EP soon?

There is another single around to follow and then an EP! I can’t say much on release dates because I have no idea!

You’ve obviously written so very much for your EP, how important is it to you that you write your own music?

The most important. I’m very open to collaboration though. I used to be a bit of a gatekeeper when it came to writing but thanks to my team I’ve learnt I just love being in the room. I’m very wordy, so the majority of the lyrics come from me but concepts and melodies are anyone’s game. For example, James (Bourne from Busted) brought in the most beautiful piano part/chorus/concept for one of the songs on the EP. I’m so proud to have my name attached to it.

So, lastly before we hit repeat on ‘Words Around’ for the 30th time in a row, what can we expect to come over the next year?

I’ve always wanted to play a headline show so maybe that! I’m not sure, the idea of a room full of people who travelled there to hear me sing is crazy to me but a girl can dream! I just wanna have fun really and make music I’m proud of.

And we really can’t wait to be at your first show Katy!

You can stream Words Around now on Spotify and Apple Music – and subscribe to Katy’s YouTube page for much more music.