Over two years ago, Supernatural’s Jared Padalecki announced his first ever “Always Keep Fighting” campaign. He didn’t know it then, but that one campaign would blossom into so much more.

“Always Keep Fighting” quickly became a mantra for the SPN family. Not only did it encourage both Jared and his fans to continue fighting against their demons, but it also shed a massive light on mental illness. Jared sharing his story had a ripple effect, and his decision gave others the strength to share their own.

As time moved by, Jared came out with more campaigns. While all of them stemmed from “Always Keep Fighting”, he promoted other important messages as well, such as “You Are Enough” and “Family Always Has Your Back“. Jared joined forces with his co-star and friend Jensen Ackles for a couple of them, and in one of the latest ones, Supernatural’s angel, Misha Collins, got involved.

Not only did these campaigns raise massive funds for charities like To Write Love On Her Arms, but undoubtedly, they played a crucial part in many fans’ lives. For several of them, Jared’s actions are what encouraged them to not give up and to keep breathing.

Jared never thought that his campaign would lead up to an entire movement, but it did.

And to celebrate the shirt that started it all, Jared is relaunching his first campaign.

In an announcement through Facebook Live, Jared is bringing back the original “Always Keep Fighting” shirt. It will be available for the next couple of days.

While the front is identical to the first design, the sleeve now includes a sweet little symbol on one of the sleeves. 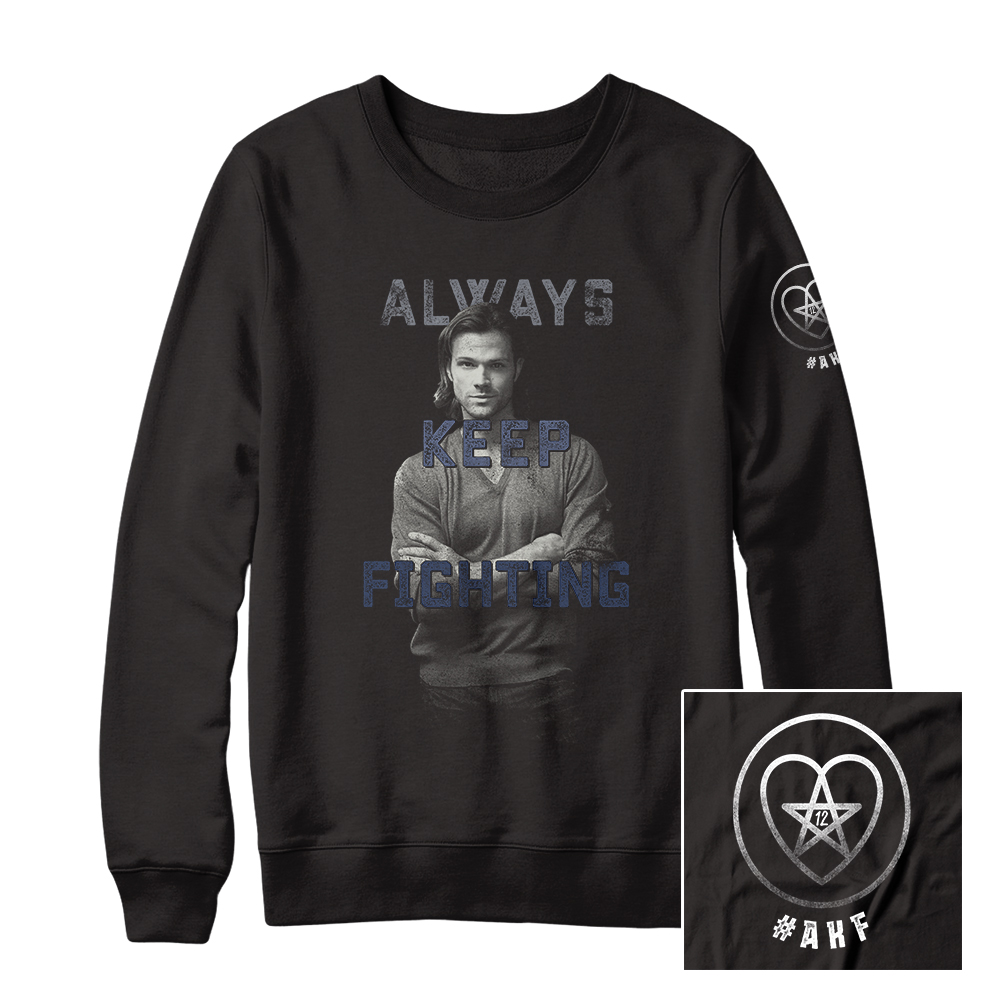 Like always, there are a few different t-shirt styles you can choose from. And, for the first time, there is also a small mug available for purchase. It’s the cheapest of the options, and it is currently set at $14.99.

If you’re an “Always Keep Fighting” and/or a Jared Padalecki fan and you want to get your hands on something from the relaunch, all the items came be bought through Jared’s Represent page. If you don’t want to make a purchase, you can help by sharing the campaign through social media.

The “Always Keep Fighting” campaign is still going strong, and it will doubtfully lose momentum. As the years go by, it will surely continue to show people their true strength; that they are capable of overcoming their challenges.

We couldn’t be more appreciative of Jared Padalecki’s efforts. We are incredibly thankful for the lives he’s already helped, and the ones his campaigns will aid in the future. The world could use more people like him.

Have you boughten anything from Jared’s campaigns? Are you a Supernatural fan? Tell by tweeting us at @CelebMix.

You are never alone. If you or a loved one are in a crisis, reach out. To find a crisis hotline in your country, go to suicide.org. If you or someone you know is in immediate danger, get in contact with your local emergency services.