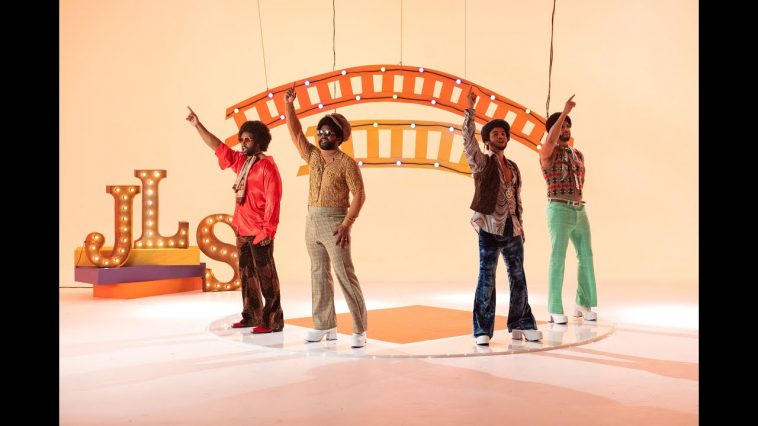 JLS have unveiled the incredible music video for their comeback single ‘Eternal Love’, their first release as a band in over eight years.

The visual sees Aston Merrygold, JB Gill, Marvin Humes and Oritse Williams take us through the decades whilst they perform in ‘The JLS Show’. The video begins with a classic black and white scene paying homage to the 50s, before they whip out their funky ‘fros for a 70s vibe performance.

JLS also don black leather outfits as channel their inner 90s RnB boyband before making their way to the present day. Showing a whole new side to the group, this is one of their most fun visuals to date.

Earlier this week, JLS took to the stage at The O2 Arena, London to perform a sensational medley at the National Television Awards. The four-piece boyband performed ‘Eternal Love’ alongside their iconic hits ‘Beat Again’ and ‘Everybody In Love’.

‘Eternal Love’ is the lead single from JLS’ forthcoming studio album, 2.0. The 11-track album will be released on December 3 and is available to-preorder now. A number of exclusive fan bundles including signed copies, coloured vinyls and cassettes are available from the JLS merch store.

Next month, JLS will be embarking on their long-awaited Beat Again tour with a total of 28 dates across the UK and Ireland. The tour will begin on October 20 in Glasgow and will finish in Birmingham on November 27.

What do you think of the video for ‘Eternal Love’? Let us know on Twitter @CelebMix