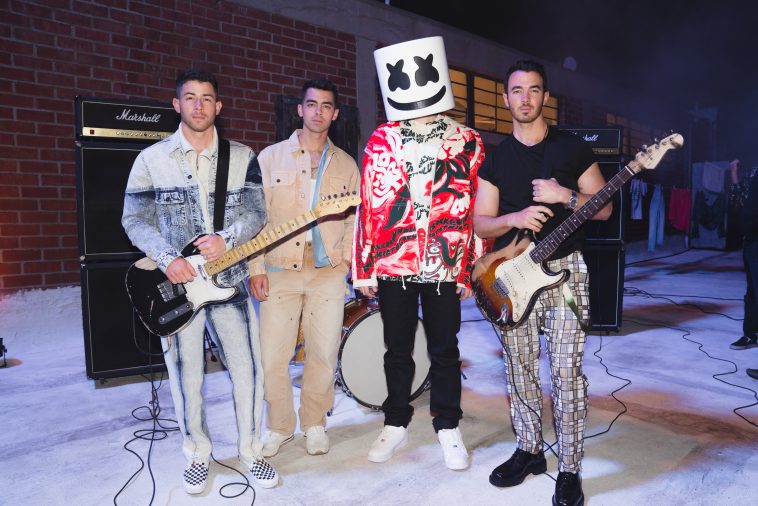 The Jonas Brothers have teamed up with EDM producer and DJ Marshmello for their latest single, ‘Leave Before You Love Me’.

The track is a smooth and slick offering laced with 80s inspired undertones, reminiscent of ‘Strangers’ from the band’s previous album Happiness Begins. A summer bop in the making, ‘Leave Before You Love Me’ gives off those long midnight drive vibes and we are completely here for it.

Dancing on the edge, ’bout to take it too far
It’s messing with my head, how I mess with your heart
If you wake up in your bed, alone in the dark
I’m sorry, gotta leave before you love me

Jonas Brothers and Marshmello will be performing the song together at the 2021 Billboard Music Awards this Sunday, as part of the band’s special medley which will close out the show. Nick is also on hosting duties, so you can expect plenty of Jonas goodness during the ceremony. The show will be broadcast live this Sunday (May 23) from the Microsoft Theater in Los Angeles at 8pm ET/5pm PT on NBC.

‘Leave Before You Love Me’ follows on from the exciting news that the Jonas Brothers will be heading out on tour this summer. With support from Kelsea Ballerini, the 44-date ‘Remember Me’ tour kicks off in Las Vegas on August 20. Tickets go on sale on May 27.

The ‘Remember Me’ tour takes its name from the song of the same name, which will debut on June 18. The track kicks off a special partnership with NBCUniversal in anticipation of the Tokyo Olympics and will tell an Olympic-inspired story with athlete imagery and a special message from the Jonas Brothers.

The trio will also deliver their first-ever performance of ‘Remember This’ within NBCUniversal’s coverage of the Games. The in-Games version of the single will feature new lyrics which are inspired by the Olympic Games and Team USA.

The news of this collaboration follows on from the announcement of Olympic Dreams featuring the Jonas Brothers earlier this week, which will premiere two days before the Opening Ceremony of the Tokyo Olympics on July 21 at 8 p.m. ET/PT on NBC.

‘Leave Before You Love Me’ is available to download and stream now.

What’s your favourite piece of Jonas Brothers news from this week? Let us know on Twitter @CelebMix