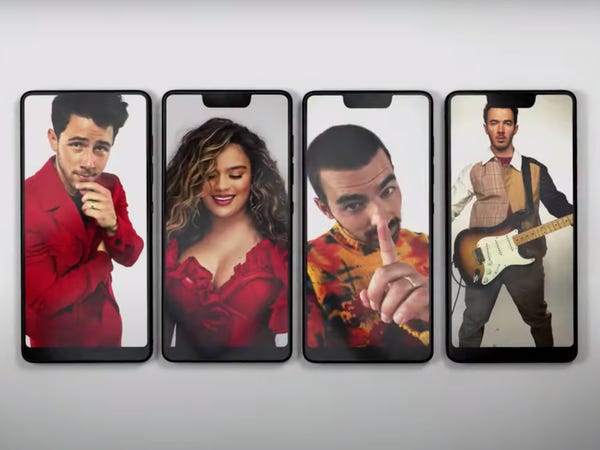 After releasing on Friday, May 15, the Jonas Brothers’ new single “X” became a popular hit over the weekend, reaching the top 5 position on the U.S. iTunes sales chart. The song features Latin Grammy award-winning artist Karol G, who launched her career on the Columbian version of The X-Factor.

Now, the brothers and Karol G have released the music video for the song. The video was clearly filmed during this quarantine because the artists are all on iPhones rocking out in their own homes. On Twitter, they explained video was filmed with their directors over Zoom. They made the best of the situation though and still gave fans a great video.

They all stuck to a red, yellow, and black theme to go along with the cover art of the single. We are living for Nick’s red suit and dance moves. You can also see the brothers “sharing” a bottle of Nick’s tequila, Villa One. They are ready to party!

Watch the “X” music video below.

We can’t wait to dance to this song once this lockdown is over. You can tell they had a lot of fun filming the video. We do wonder what the original video would have been like if they weren’t in quarantine.

“X” is predicted to be a contender for the Song of the Summer. The Jonas Brothers even virtually performed it on May 16 on the Graduate Together broadcast. During the show, they congratulated the graduates before they wished them the best.

Next, they will perform the song on the finale of The Voice on May 19. Be sure to tune in at 9/8c on NBC.

We can’t wait to hear what they release next. You can watch the music video on YouTube and continue to stream “X” on all streaming platforms.

What do you think of the music video? Tweet us at @CelebMix.