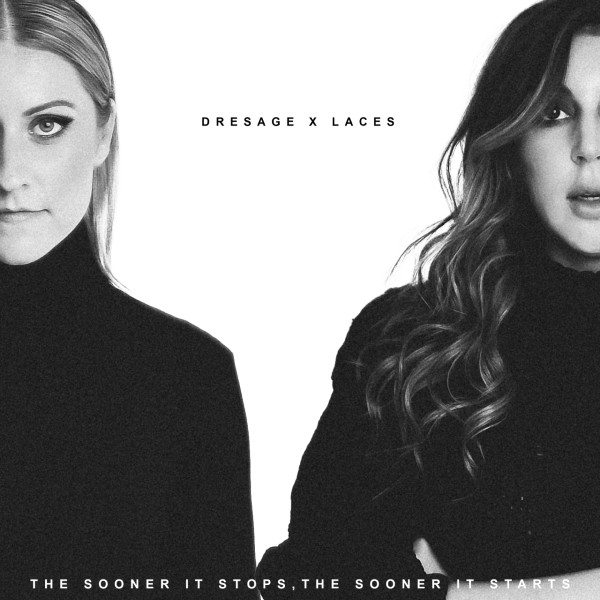 LACES and Dresage – aka Jessica Vaughn and Keeley Bumford – drop their new single, “the sooner it stops, the sooner it starts,” via Head Bitch Music.

LACES explains, “I think there are moments in our lives – often something traumatic that can make us feel like we are deemed to repeat the same stories and live them out in our heads. Often it can feel like every time we take a step forward, we take two steps backward. ‘the sooner it stops, the sooner it starts’ is a conversation we have with ourselves and others to try to let go of those cyclical thoughts and try moving forward instead of being stuck in the past.”

Multi-talented LACES, who formerly released music under the name Charlotte Sometimes, writes and produces subtle, delicious alt-pop music. As Jessica Vaughn, she composes and produces music for Hasbro cartoons, like Jem & the Holograms, Baby Alive, Littlest Pet Shop, and Equestria Girls, along with placements on the CW, Netflix, ABC, and films. She also writes for other artists, appeared on The Voice, and did a stint on Geffen Records.

On her part, singer, producer, writer, and composer Dresage creates music ranging from dreamy synth wave to indie art pop. She collaborated with Jai Wolf on “Better Apart,” which collected more than six million streams on Spotify, along with co-scoring the Hule/Blumhouse film, My Valentine, as well as being featured in YouTube’s series 4 Producers 1 Sample with Andrew Huang, followed by releasing “HOLY,” which has amassed more than 500,000 views. She also collaborates with femme-driven initiatives, fueling inspiration and self-empowerment in others.

“the sooner it stops, the sooner it starts” opens on gentle swirling tones, followed by the entry of a creamy, evocative voice. A rumbling-lite, syncopated rhythm gives the tune an undulating, throbbing cadence as shimmering, luminous leitmotifs flow overhead. Glowing, velvety harmonies imbue the song with radiant depth and dimension.