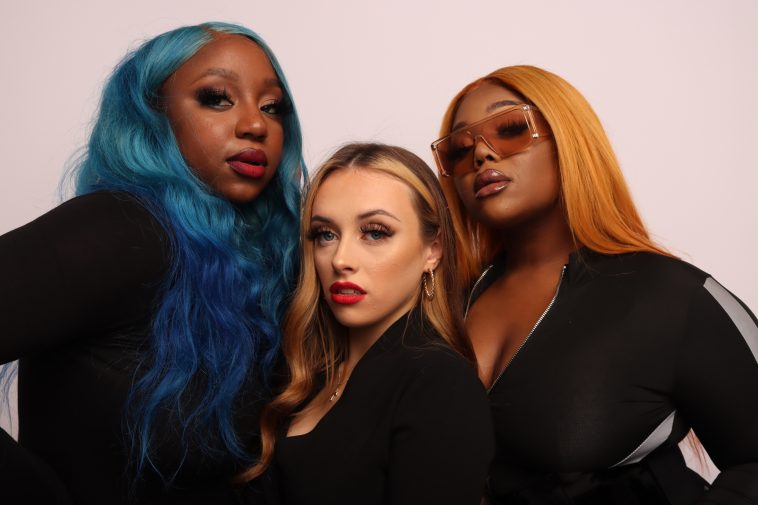 Nostalia are just one of the exciting new groups on everyone’s radars, ever since they competed on “Little Mix: The Search” last year, finishing as runners-up behind series winners Since September.

The group, consisting of Tamara, Esther and Zitah, have finally treated fans to their first single, their rendition of the classic Rihanna hit “Diamonds”, which they first performed in the final of the BBC series.

Here at CelebMix, we got to talk to Nostalia to find out more about the single, their time on “Little Mix: The Search”, and what’s next for them as a group. Nostalia member Tamara will be providing the answers.

Hi girls! What’s your musical journey been like since competing on “Little Mix: The Search”?

“Our musical journey has been amazing since doing ‘Little Mix: The Search’! We’ve really gotten time to grow together as a band since the show and have been working hard on finding our sound. We are definitely not close to where we want to be, but we are going to work so hard to get there!”

How did it feel to come in second place? Did you ever expect to come that far on the show?

“It felt amazing to place second on the show! The winning group definitely deserved it and we were absolutely rooting for them! It was such a surreal experience and even now thinking back it’s so hard to believe I was even on a show like it!”

How does it feel to be releasing your cover of Rihanna’s “Diamonds”?

“We are so excited to have released our brand new single! It was such a special song to us in the show as we closed the entire programme with this number. So we thought to pay tribute to that song as our first single, before we start releasing original music. It definitely holds a special place in our hearts.”

You previously performed this song during the final of “Little Mix: The Search”. What inspired you to cover the song?

“On the show we did a mash up of  Billie Eilish’s ‘Whe the Party’s Over’ and Rihanna’s ‘Diamonds’ because they were both songs we loved that we really connected with. The response we had was so amazing both from Little Mix and YouTube viewers, we really wanted to give back to the Nostalians who have supported us before we start putting out our new material.”

You have also made a music video for the track. What was the filming process like, and how different was it due to the pandemic?

“We really enjoyed filming our music video! It was definitely an interesting task due to Corona[virus] but we pulled through, made sure all guidelines were followed and had a blast! Personally for me, the music video was one of the most enjoyable aspects of releasing our single.”

What was your favourite performance from “Little Mix: The Search” and why?

“I think I speak for all 3 of us when I say ‘As’ was our favourite performance! Not only was it our winning week but it was also the week we felt most confident and in sync. it was just such an amazing song with really good energy to it and we took to that very quickly!”

“As much as I have enjoyed covering other people’s songs, I think it’s time for us to branch out now and find our sound and release our own music that really speaks to us on a far more personal level. Original music is a completely different from cover songs and I think as a trio we have so much to offer! I don’t think you guys are ready for our originals.”

Do you have any other favourite moments/memories from taking part in the series?

Do you girls have plans to release an EP or an album in the future?

“We absolutely do have plans to release so much in the future and we just can’t wait to get started and for everyone to hear what we have in store!”

Once it is safe enough, would the three of you be open to touring or doing a live show?

“Once it is safe enough, it would be a dream for us to tour and have our own show. Being on stage is where we belong and we just cannot wait to get up there and feel the energy from a crowd!”

If there is any artist you would like to collaborate with, who would it be and why?

“Finally, we just want to thank our fans from the bottom of our hearts! Their commitment and dedication is just unreal and we are really blown away by the response and support we receive on a daily basis. Hopefully soon we will be able to perform for them and also meet them!”

We also want to thank Nostalia for taking the time out to talk to us!

Nostalia’s new single “Diamonds” is officially out now, and you can listen to it and watch the official music video below: