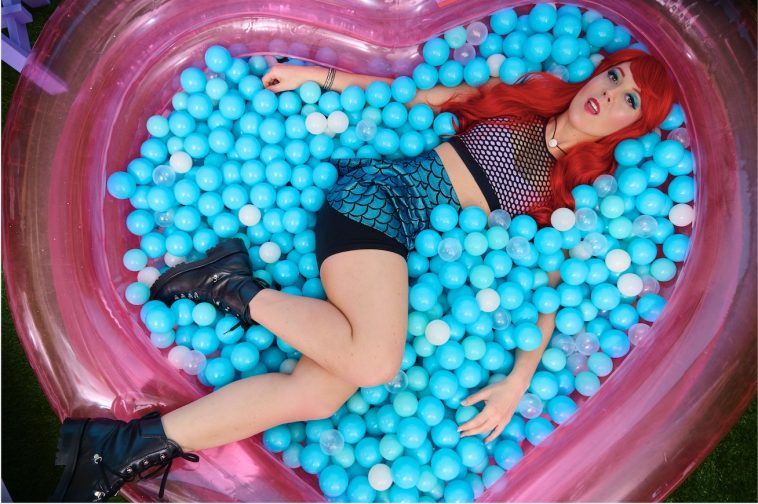 Only Bricks just released their exciting new single and video for “Smile, It’s Over :)”, which marks the end of a chapter and bright new beginnings for vocalist Anne DiGiovanni, who just quit her job as a corporate attorney to pursue her career in music. The song, a bubblegum 90s flavored pop gem with plenty of punk flavored originality, is a true “F-U anthem,” acting as a voice for the voiceless and a “swan song for everyone who’s ever raged against corporate America.”

In “Smile, It’s Over :)”, Only Bricks dives deep to expose uncomfortable truths about society, power, and mental poverty. Unabashedly paving the way for powerful transformation and rebirth, Anne is guided to use her gifts to live a more fulfilling purpose driven life. As she says her goodbyes and closes the worn out chapter, she is greeted with relief, newfound confidence and a welcoming feeling that propels her forward into an exciting new experience.

With explosive melodies, taunting vocals that command attention, and plenty of throwback nostalgic flavors, the song is inspiring and defiant at the same time, adding to the overall theme of self-empowerment. DiGiovanni confides, “It was written to honor this transition of mine, to give voice to that inner celebration we all do, no matter how much we’ll miss the people or places or projects we inevitably say farewell to.” Lewczak further adds, “This song was such a fun collaboration with our friends Kayleigh (Torok) and Clifton (Jennings).  We wanted to flip the niceties of the standard work goodbye email on their head and say what everyone really wants to say but never does.”

The video for “Smile, It’s Over :)” paints the story of DiGiovanni’s transformation, from human to, well, mermaid – in the band’s signature lighthearted way. In a burst of colorful scenes with costumes and an interesting use of props reminiscent of being a kid in the 80s,  DiGiovanni is seen “transforming into a mermaid who is living it up in a “pity pool” of her former co-workers’ platitudes, finally having found her own voice,” according to the press release. “It was pure joy to be surrounded by bright colors, wearing fun wigs, jumping around to our song, after over twelve years of stifling office culture,” DiGiovanni adds.  “This visual represents my artistic, creative side breaking through at long last.”

Only Bricks resides in sunny Santa Monica California. Releasing five singles in 2021, the band continues to push the status quo with their thought provoking storylines and clever sense of humor.

Check out “Smile, It’s Over :)” by Only Bricks and tweet @CelebMix what inspires you to follow your dreams!