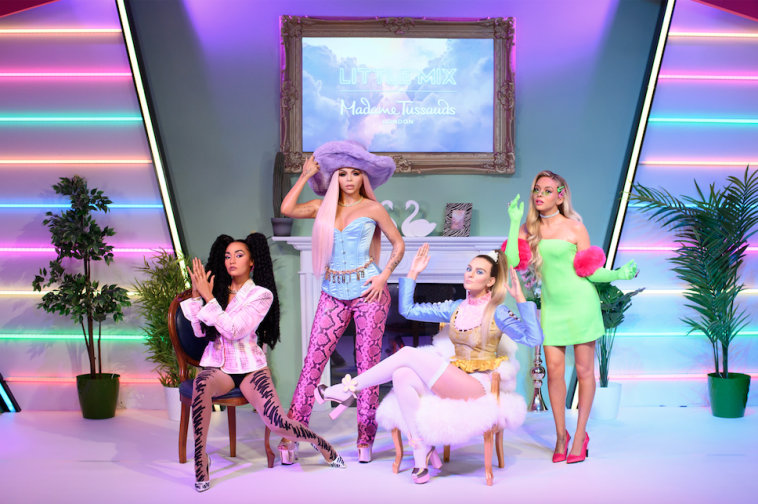 To celebrate their incredible 10 years together as a band, Madame Tussauds London have this week unveiled the figures of the biggest girl group on the planet, Little Mix!

The four figures were given the seal of approval by Little Mix fans Wednesday (July 28th) morning, who had won a competition to be the first to ‘meet’ the figures of Jade, Perrie, Leigh-Anne and Jesy who have been immortalised in the style of their famous 2019 Bounce Back music video, complete with accompanying colourful set.

After being treated to a luxurious overnight stay at the London Marriott Hotel County Hall, the lucky fans were whisked over to Madame Tussauds London to get an exclusive first look of the figures before they launched to the public.

Little Mix have been working closely with the world-famous attraction on the creation of their figures since early 2020, including attending sittings where hundreds of precise measurements were taken, through to advising on the final details of each figure.

When asked why they chose the Bounce Back look for their Madame Tussauds London figures, Jade said, “We loved making this video and the concept of us being doll-like within it, it felt like a very fitting scene to recreate for our figures! When I saw my finished figure it was like looking in a mirror, it’s amazing!”

Of getting their own likenesses, Leigh-Anne said, “This is a dream come true. The figures are amazing, and the Madame Tussauds London artists have captured us perfectly. We’re so excited to be joining the attraction’s music zone and can’t wait to bring our family and friends down to see our figures for themselves.”

Tim Waters, General Manager at Madame Tussauds London, says of Little Mix: “Fans have been asking when Little Mix will be joining us at Madame Tussauds London and we’re delighted to make their wishes come true as we celebrate the bands 10th anniversary. From their award-winning music, to inspiring the next generation, Little Mix have been a massive part of the past decade and long may that continue! We look forward to welcoming Mixers through our doors and can’t wait for them to come face to face with their idols.”

Check out some of our favourite images of fans posing with the girls waxwork figures: