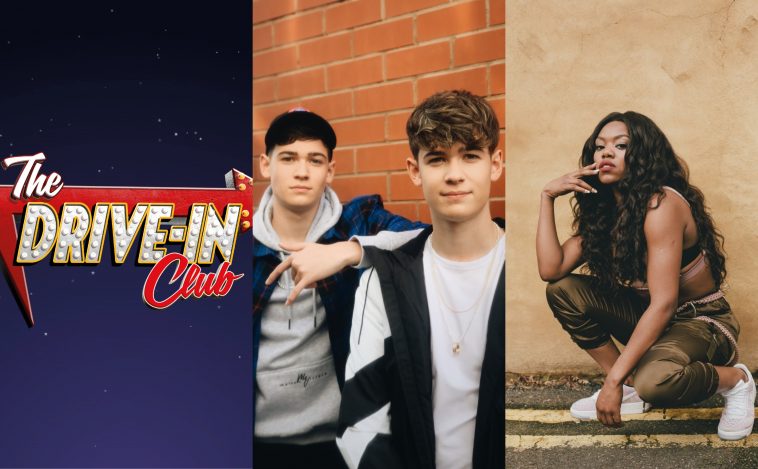 Max & Harvey and Lady Leshurr are just some of the stars who have joined the lineup for the all new Drive-In Club!

The event, which officially launches this Friday, takes place at Brent Cross in North London, allowing visitors the chance to enjoy entertainment from the comfort of their own cars while adhering to social distancing guidelines.

As well as music, you can also expect comedians such as Jason Manford, Bill Bailey, Dom Joly and Adam Kay to bring you hours of non-stop laughter, while fun will be provided for children in the form of live shows from the likes of Basil Brush, Dick & Dom and Sooty Sweep & Co.

If that wasn’t enough, there will be plenty of film screenings to enjoy, with Disney classics including Moana, Finding Nemo and The Incredibles 2 set to be shown, as well as Hollywood blockbusters such as Pulp Fiction, Black Panther and A Star Is Born.

Food and drink will also be provided at the Drive-In Club from Heineken 0.0 (the UK’s best selling alcohol-free beer), The Clean Liquor Co, Hun Wine (vegan friendly wine) and Papa John’s Pizza. You will be given the chance to order food and drink online on the day and get it delivered direct to your car.

Taxi company Zipcar will be sponsoring the event. The first 100 people to sign up and purchase a ticket to one of the Drive-In shows will receive £20 driving credit. Comic Relief will also be a charity partner.

The Drive-In Club officially kicks off this Friday, with screenings of Moana and Grease and performances from Dom Joly and Daniel Sloss. Tickets cost £35 upwards per vehicle. To find out more click here, and to purchase tickets click here.

Will you be attending the Drive-In Club? Let us know over on Twitter @CelebMix!