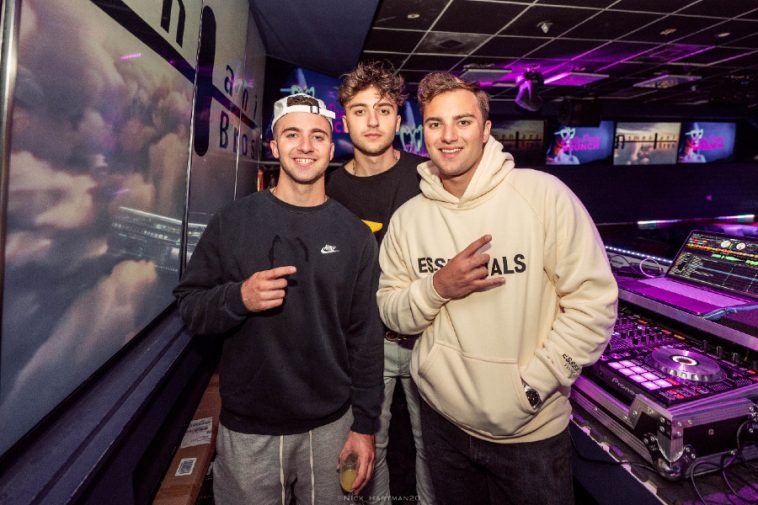 The Armentani Brothers are a DJ trio from the City of Brotherly Love. Their single, “Next to You,” has amassed more than 500,000 streams on Spotify, followed by “Better Than This,” featuring Zoobstool, which collectively reaped over 400,000 streams.

Made up of three brothers – John, Jimmie, and George – The Armentani Brothers have shared the stage with Steve Aoki, Kaskade, Two Friends, Galantis, and W&W, along with performing at venues all over the U.S.

Prior to performing together, they performed solo. Once the time was right, they formed The Armentani Brothers. Their electrifying EDM sound galvanizes listeners with shimmering colors, potent rhythms, and delicious vocal harmonies.

CelebMix spoke with The Armentani Brothers to discover more about them, how they got started in music, and what’s next for the three brothers.

Music has been a part of all of our lives from a young age. Our grandfather introduced us to music at a young age, as he had his own Greek Orchestra, the George Giordas Orchestra. On top of that, our dad introduced us to classic rock when we were young, and that is what inspired us to learn certain instruments such as the guitar and drums. And of course, our mom kept us committed to our piano music lessons throughout our childhood.  All these years surrounded by music gave us a great foundation and idea for what sounds good to the listener.  This comes into use every day in the studio producing music and when we are on the stage mixing music together for crowds at our shows.

You will be touring the East Coast soon. What can your fans expect?

Fans can expect a fun, energetic, and memorable set. Whether it’s a champagne shower, John with his shirt off, or a phone being tossed from the crowd to the stage, you never know what you might see during this tour.  We are excited to present our fans with some new songs, mashups, and remixes. The song we are most excited to present is ‘Red Lips,’ which is an unreleased song signed to EDX’s label, Sirup. This song features house legend Tommy Capretto, and it is set to release in April. We are ready to bring the fans some high-energy performances full of lifelong memories!

What inspired your hit single, “Next to You?”

‘Next to You’ came about when working with Kendall Huggins and Tony Arzadon. Kendall wrote the lyrics, and Tony helped us make our first release as The Armentani Brothers sound professional. We are very thankful to Tony for his help and lucky to work with the talented Kendall Huggins. The goal of this song was to uplift listeners and make them lose themselves in the music. After many drafts sent back and forth, we were able to finally decide on a final copy for the track and provide our fans with our first original.”

What can your fans look forward to over the next six months?

We have many new remixes, mashups, and original music on the way. We are very excited for our next two releases, ‘Red Lips’ with Tommy Capretto, and ‘Enough of You’ with the Little L3gends. On top of this, we have a new mashup pack of ‘Armentani Appetizers’ ready to release, a continuation of our mix series (‘Family Dinner’ Mix Series), and remixes that will be released soon/have already been released.