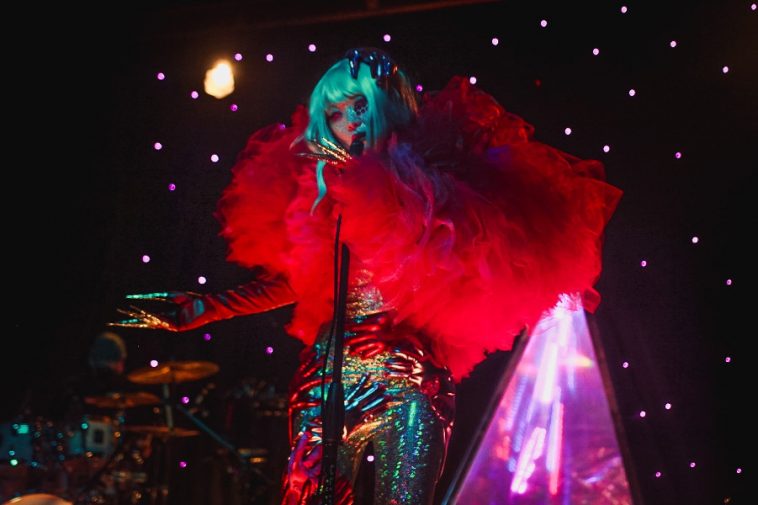 Brooklyn, New York-based artist Gocco unveils her brand-new single, “Endless,” which will be featured in her upcoming film, Cosmosis, releasing in May.

Both the music and the film examine growing up bilingual in Japanese and English, which produced intense shyness, leading to a dynamic inner world. Visual arts, including fashion design and film, provided Gocco with an outlet for expression.

Cosmosis was filmed with a live studio audience and strict health protocols at Studio 111 in Williamsburg, Brooklyn. The show brings together astral, experimental interludes with electro-pop and R&B-inspired beats, all tied together with Gocco’s ethereal, dreamy vocals. She is joined on stage by V. Jeffrey Smith of Family Stand and Ghetto Heaven fame on sax and guitar; Howard Alper, drummer and producer; Leon Gruenbaum, inventor of the SamChillian and keys maestro, as well as Jason DiMatteo on bass.

Born and raised in London by Japanese musician parents, Gocco found refuge in the vibrant arts and music scene of Brooklyn, where she can articulate her complex identity.

Gocco’s sound reflects her fascination with hip-hop, folk music, Latin beats, ‘70s prog-rock, and rock. While Gocco was listening to a mixtape given to her by a bandmate at home, her mother asked, “Why are you listening to David Bowie? Do the kids listen to that now?”

Gocco’s parents had met David Bowie through dancer Lindsay Kemp, who was Gocco’s godfather. Her mother taught Bowie Japanese and he loved Gocco’s mother’s voice, asking her to feature on the first track of his Scary Monsters album.

During her formative years, knowing the hardships of life as a musician, her parents discouraged her from pursuing music as a career. But a friend in secondary school, a punk rock girl who sported a flash of short purple hair under her hijab gave her a copy of Radiohead’s OK Computer that cemented her love for experimental music.

Gocco attended Central Saint Martin’s School of Art, of Sex Pistols fame in London, where she studied Graphic Design and Illustration, and it was during this time at university that she started playing in bands in the underground prog and noise scene that became a foundation for her passion in music and performing arts.

Wow! Gocco definitely has it going on! “Endless” ripples, sways, and rolls on silky-smooth leitmotifs, topped by the irresistible voice of Gocco.