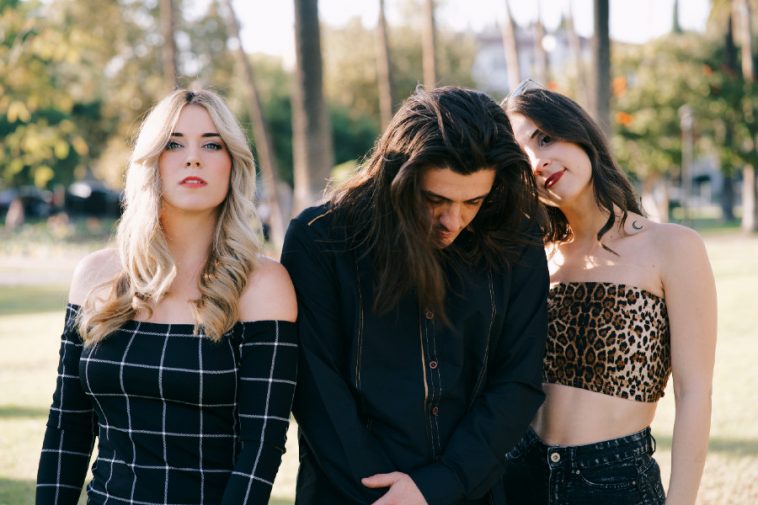 Talking about the song, the band says, “‘I Don’t Fit In’ is inspired by conformity and censorship. It’s a quirky fast-paced lyrical anthem reminding listeners to speak up and be proud of who they are. Be different, be unique, don’t be afraid to speak your truth.”

Founded in 2014 by TJ Ferranola, an all-star athlete with musical talent no one expected, and his sister, Chelsea Rae, a visual artist and musician, Mercury & the Architects’ objective is to encourage others to embrace themselves, shape their own lives and futures, and not allow other people to pigeon-hole them.

The band released their debut EP, Poets & the Beast, in 2015, followed by entering Engine Room Studios to lay down tracks for their debut album, The Ghost that Haunts My Castle. The album had to be shelved for a while because of a black swan. Meanwhile, the trio performed up and down the East Coast and released new singles.

Moving to L.A. in 2019, TJ was in Costa Rica when he met LYNZI, who shortly thereafter moved from Texas to SoCal. 2020 saw Chelsea Rae make the trek to L.A. to join Mercury and the Architects.

“I Don’t Fit In” opens on an alt-pop-flavored rhythm and then shifts to full-bore hip-hop topped by TJ’s irresistible rapping flow. As the song teeters seamlessly back and forth from pop to hip-hop, hinging on two evocative voices, the contrasting melodies form a deliciously alluring tune.

The fulcrum point of the song’s dual flavors rests on the keyboards. The alt-pop measures ride a potent piano, while the hip-hop measures feature sleazy synths.

Mercury & the Architects have it going on! Their blend of pop and hip-hop converges into alluring music, at once muscular and melodic.

If you’re in the Los Angeles area, Mercury & the Architects will be performing with Breaking Sound at Madame Siam’s on February 22.