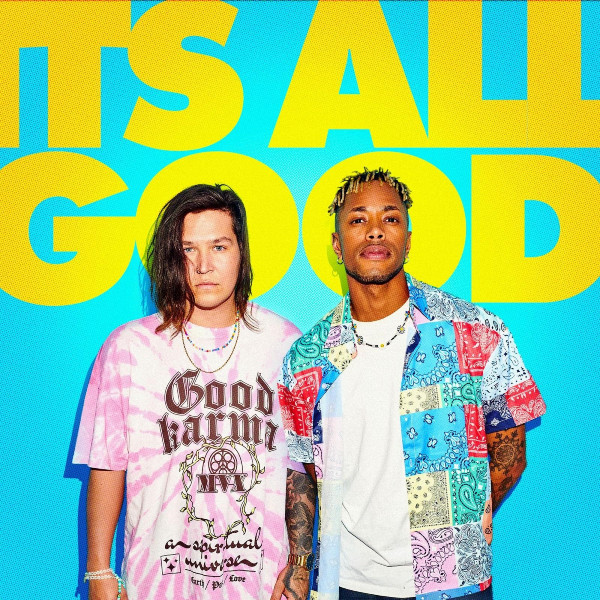 Talking about the song’s genesis, Frank Kadillac shares, “It’s a sunshine song. Music for the soul. It started from a poem I wrote.”

He continues, “A pursuit of love and change is a pursuit of happiness. Pain is worth fighting through to reach a better you, to reach someone or something you love. This song is for awkward introverted people like me who want to get out of their comfort zone and out of their heads and be a little more present. This song is a bottle filled with sunshine.”

And then adds, “I used to dance a lot as a kid with my mom and sister in the living room to ‘90s hip hop and R&B. Every time I hear this song it takes me back to those carefree moments in my life when everything felt simple. pure joy. My mom would just yell ‘let the music move your body.’ I want everyone that hears this song to feel like that. Carefree and dance like nobody’s watching.”

Crafted in Cape Town, South Africa, home of Neon Dreams’ most die-hard fans, with songwriters Majozi and Dolf Willemse, ITS ALL GOOD is a captivating, feel-good song brimming with a driving rhythm and tasty hooks.

Since the duo began making music together, Neon Dreams has earned gold and platinum certification, amassed more than 50 million streams, performed at international sold-out venues, and received a JUNO Award. Yet Neon Dreams’ focus is on inspiring others and connecting with fans on a more personal level.

CelebMix spoke with Adrian Morris to discover more about the duo, what inspires their music, how they first connected, and what it was like making the video.

How and when did you two first connect?

Me and Frank first met at a rehearsal space in Halifax, Canada. I had seen his band a few times, but we hadn’t met, and I was posting online looking to start or join a band. A mutual friend of ours showed him a video on YouTube of me playing drums and he invited me to come play a show with the band. I had two days to learn all the songs and we played the show that weekend. It was a sold-out show at a local all-ages venue in Halifax opening for a pretty established band from Toronto, so I was a bit intimidated, but it was a great first show experience.

What inspired your new single/music video, “ITS ALL GOOD?”

We lived in Cape Town, South Africa over the past year after suddenly growing a massive fanbase in that country during lockdown. When we could finally go, we were welcomed with so much love by so many people, something we never had experienced playing somewhere new before and it was an experience I’ll never forget. I think it changed both of our lives and rebirthed that same spark that we had when we started the band and had our first success in our home country Canada. That song and video really is a product of all the love we received being there, our experience, and how it impacted us as people and as a band.

Walk us through your mindset as you approached filming the video.

For me, this was an intimidating video to make. Frank grew up doing dance and there are a lot of heavy dance scenes in the video. There was also a lot of influence from movies and music he grew up with that I wasn’t exposed to. For me, it was just about having fun with those things, like transforming into a full lifeguard role or dancing goofily while he and the dancers are killing it. Before I met Frank, me and my friends had a YouTube channel where we would make sketches or joke videos and to me making a video is similar to how we made those sketches, playing a role and just winging it and having fun.

The video was shot in a few vastly different neighborhoods throughout Cape Town, from Muizenberg which is like a hip, arts and surfing side of the city, to Bellville, which is a more residential, suburban area of the city.

It was directed by Frank and Dan Lewis Cole who is a friend of ours from Cape Town, he originally joined us on our first South African tour in Spring 2021 and we instantly clicked as friends and creatives as he helped us build our first YouTube series, we then started to discuss the ideas of music videos with him and he co-directed our videos for ‘Little Dance’ and now ‘IT’S ALL GOOD.’

What do you want people to take away from “ITS ALL GOOD?”

The same sort of happiness and sunshine we felt when we made it, if someone takes away anything from the song, we hope it’s brought them some sort of positivity or happiness in their life.

You have a new album dropping this fall. What can you share about it?

That we’re at the final stages of it right now! It’s getting really close, and we think we’ve made some of the best music of our lives. We hope the whole world hears it.

I started playing piano from a young age but as I got a bit older everyone was playing “band” instruments like guitar, drums, and bass. Everyone looked like they were having fun playing with each other, but I didn’t think piano could fit in that world, so I switched to drums. Looking back, I wish I kept up my piano playing!

I think it did but in different ways than most would think. Halifax has a deep history with sailor folk music, fiddles, and bagpipes. But growing up it had a vibrant rock/punk/metal all-ages scene. Then we discovered the hip hop and electronic scene, then everything else Halifax has to offer. What I think that did for us has allowed us to draw inspiration from so many different genres of music and feel comfortable doing so, it feels authentic to us because we got to experience all those different music scenes.

Happiness, if what you’re doing is making you happy keep doing it and you’ll find more.