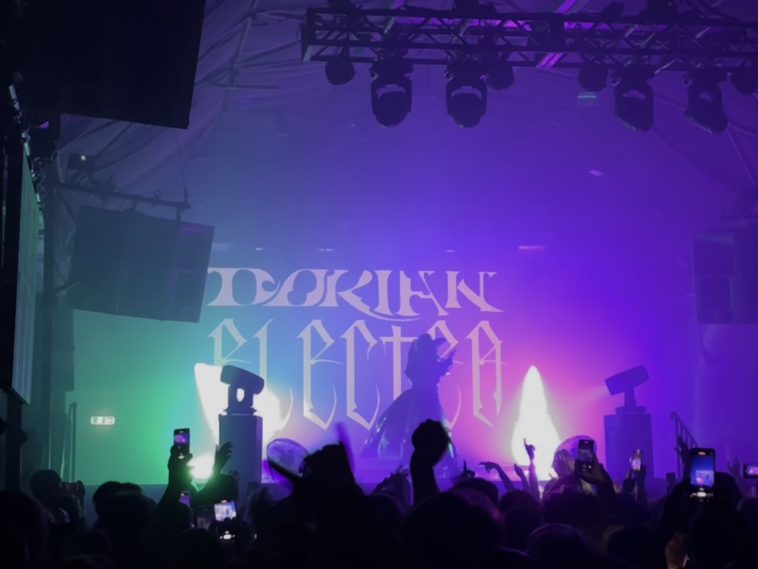 The effervescent pop shapeshifter has spent the last four years rising to the top of an underground pop scene, witty lyrics and out-of-the-box production at the forefront.

Two and a half years ago the singer took debut album Flamboyant to London’s Village Underground.

That night was one to remember. Just 18 months previous Electra performed a three-minute cameo on the same stage at Charli XCX’s Pop 2 show, still a relative unknown.

To go from the fringes to front and centre of the hyperpop world in such a short time was a credit to the world Electra had created.

Fast-forward two and a half years and Electra is back in the capital, this time at Heaven (unsurprisingly, it’s sold out again).

This time the star’s hour-long set is punctuated by tracks from sophomore record My Agenda.

Where Flamboyant saw the singer playful and winking, My Agenda is seething and aggressive.

Heaven’s walls shake as Electra struts on for ‘F The World’ and fans aren’t given a break as they whip through the electric ‘M’Lady’ and ‘Gentleman’ – the singer is joined on stage by Kero Kero Bonito for the former.

Later on in the night, the clanking 87 seconds of ‘Sorry Bro (I Love You)’ is a highlight fans have been waiting years for and the furious ‘Ram It Down’ surely sends some sort of earthquake across London.

Slipping from the ‘Gentleman’ character to the damsel of ‘M’Lady’ and the crude songstress of ‘Give Great Thanks’ to the Liberace of ‘Flamboyant’, Electra’s passion to subvert expectations translates to new heights on stage and is gloriously moreish.

That playfulness has been ever-present across Electra’s career, closing track ‘Career Boy’ a reminder of that, but it’s impossible not to notice the star has levelled up between the London visit of 2019 and now.

Smirking as they finish ‘Career Boy’ on the promise that ‘nothing will make me stop’, you can only believe Dorian Electra. They are in their own lane.

Are you a Dorian Electra fan? Let us know @CelebMix on Twitter.