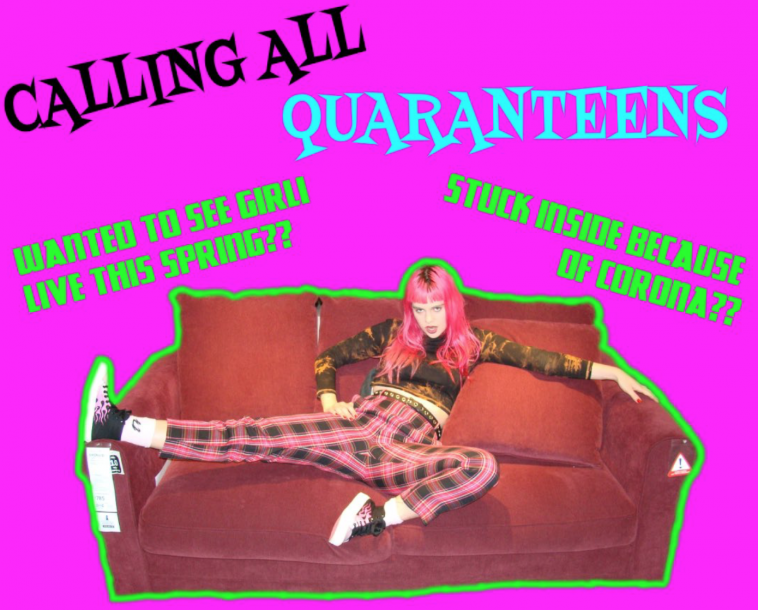 Bringing fans together for a night of GIRLI classics on Instagram Live, CelebMix tuned in for the punk popstress’ online set.

Featuring hits from last year’s frolicking debut album Odd One Out, as well as deeper cuts, 1,300 fans attended the half-hour-long show. Encouraged to mark their hands with the letter ‘G’ and get on their feet, the trademark GIRLI energy that CelebMix caught at Manchester’s Band on the Wall last year was back with a vengeance.

Opening on the tongue-in-cheek ‘Pink’, GIRLI sports a fan-made two-piece. Moving quickly into 2018 single ‘Day Month Second’, which boasts over one million Spotify streams, the singer dedicates the track to “anyone who has been through a break-up recently”.

Changing into a bodysuit by Kennedy Design for the Hollywood-inspired ballad ‘Friday Night Big Screen’, a clear fan-favourite going by the comments that come flooding in, GIRLI begs that “I’ll be your Buttercup, you can be my Westley”.

More Odd One Out flicks come later in the evening with ‘Stick Out’ and pulsing lead-single ‘Deal With It’. Elsewhere, ‘Up & Down’ is an ode to self-care from the outspoken advocate for mental health, introduced with a nod to the testing times at hand:

“A fitting topic during these times. I’ve been feeling pretty anxious and worried about slipping into a depressive episode. I also struggle from OCD so I’ve been struggling with the cleaning and germaphobe element.”

During the show, deeper cuts come in ‘Not That Girl’ and the hugely-requested ‘Girl I Met on the Internet’, bridging times between different GIRLI eras. A final hurrah on sing-along hit single ‘Hot Mess’ closes the stream with a bang.

Announcing more potential live shows in the coming weeks, as well as competitions for fans to win FaceTime calls from the singer, there’s plenty to stay tuned for on GIRLI’s Instagram.

For those wanting even more exclusive content such as teaser tracks, vlogs and more, the singer has also launched a Patreon for fans to get their fill.

Did you tune into GIRLI’s Instagram Live set? Are you signing up to the singer’s Patreon? Let us know @CelebMix on Twitter!