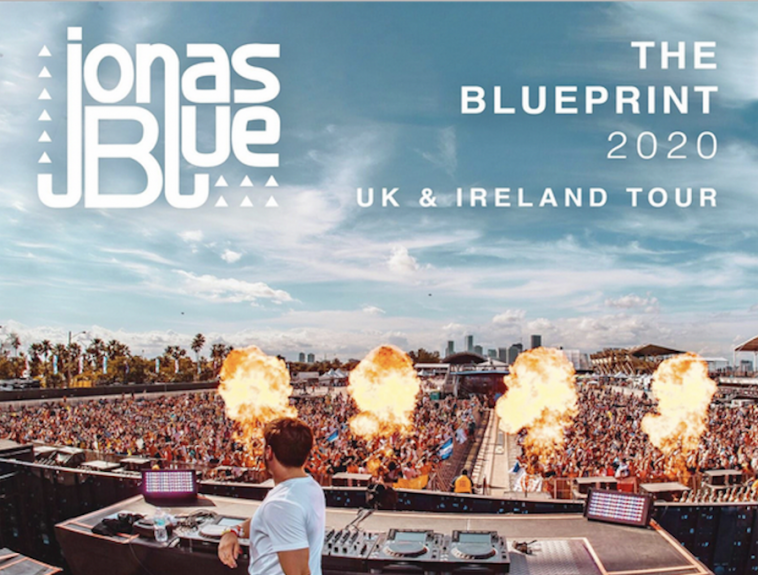 On Thursday night (March 5), DJ and producer Jonas Blue performed a sold-out show at the Electric Ballroom, Camden as part of his The Blueprint tour. Despite the dismal weather outside, the heavy rain did not deter the crowds from lining the streets in droves, ready for a night of dance music.

Kicking off proceedings were production trio Goodboys. During their 45 minute set, they pumped up the crowd with a string of remixes including Lizzo’s ‘Truth Hurts’ and Joel Corry’s ‘Sorry’. Whilst each song was a hit with the packed out audience, the biggest response was saved for Goodboys’ own track ‘Piece Of Your Heart’, with the crowd jumping and singing along at the top of their lungs.

After a 30 minute interval, it was time for Jonas Blue to take to the stage. Joined by a live band and singers Celina Sharma and Aaron Levi, Jonas kicked off his set with his Tiesto and Rita Ora collaboration ‘Ritual’. A string of his hit singles followed including ‘By My Side’, ‘Rise’ and ‘Mama’, with the crowd happily lapping up every beat.

It was clear that the audience was full of hardcore fans, with lesser known album tracks including ‘Younger’, ‘What I Like About You’ and ‘Wherever You Go’ getting just as energetic a reception as Jonas’ best known songs. His underrated single ‘We Can Go Back’ was delivered beautifully by Aaron, whilst Celine really came to life on ‘Wild’, delighting the crowd with her gorgeous vocals and sassy movements.

Both singers delivered some seriously impressive vocals throughout the evening, and they did justice to each song from Jonas’ diverse collection. The set was also enhanced by the addition of an excellent live band. It’s all too easy for DJs to just play their music through a sound system, however, Jonas really stepped things up a gear which the band adding an extra layer of depth to his songs. From the hard hitting drums to guitars, the band helped to create an electric atmosphere, whilst giving a new lease of life to Jonas’ infectious discography.

In the middle of his set, Jonas stepped away from his own songs to play a small DJ set of remixes. With tracks including Regard and Jay Sean’s ‘Ride It’ and Ed Sheeran and Khalid’s ‘Beautiful People’, this was a chance to further pump up the crowd before entering the second half of his set. The use of lights and the screen at this point were particularly effective, with the crowd itching for more of Jonas’ best loved songs.

A Jonas Blue gig wouldn’t be the same without the track which started it all – ‘Fast Car’. A definite fan favourite, this was followed by his Becky Hill and MK collaboration ‘Back and Forth’, before playing his latest single ‘Mistakes’ featuring Paloma Faith. He even pulled out ‘I See Love’, his collaboration with Joe Jonas from the movie Hotel Transylvania 3!

As the evening drew to a close, Jonas made sure to end his set on a high by bringing out a few guests. First up, he was joined by Scottish songstress Nina Nesbitt for their first ever live performance together of ‘Desperate’, which went down extremely well with the enthusiastic audience. Celina and Aaron later returned to the stage to perform ‘Polaroid’, which was another singalong hit amongst the crowd.

Finally, he brought out JP Cooper for a stunning rendition of his smash hit ‘Perfect Strangers’. With the room lit up with phone lights, the pair began the song in a stripped back manner before launching into a tropical infused euphoria which brought the night to an idyllic end.

Did you go and see Jonas Blue on tour? Let us know on Twitter @CelebMix