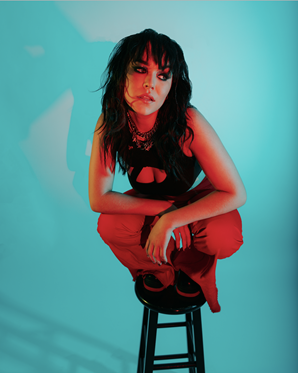 We’ve been huge fans of UPSAHL for a few years now and have eagerly been awaiting her debut album, as she’s an artist who has grown from strength to strength with every track she’s released. And her debut album Lady Jesus has been worth the wait.

It’s full of infectious alt-pop tracks that will have you singing along, radiating the I don’t give a f*** energy that Upsahl has become known for. It’s an album that shows UPSAHL at her best. She’s unapologetic, confident and created an album that will resonate with so many.

Lady Jesus does not have any track that is skippable. It’s a high energy, cohesive body of work that empowers and tells of UPSAHL’ s own personal journey with her unique and expert storytelling talents.

It’s 10 tracks of pure brilliance. Melatonin (which might be our favourite song by UPSAHL, ever), Thriving, Lunatic and album title track Lady Jesus are tracks we’ve found ourselves having on repeat, and that sound amazing live.

Last night, in celebration of the release of ‘Lady Jesus’, UPSAHL hosted an exclusive live performance and event at the oldest church in Los Angeles, Pico-Union Project. The intimate, yet all-encompassing evening featured UPSAHL and her three-piece band as they performed the entire album, which will be the only time UPSAHL plays the album from front to back. For those unable to attend in person, UPSAHL hosted a worldwide live stream of the special event. Watch HERE.

UPSAHL will perform tracks from Lady Jesus next week at her first-ever headline show at the Courtyard Theatre in London on October 12th, which sold out months in advance.

Let us know your favourite track off the album, on @CelebMix!