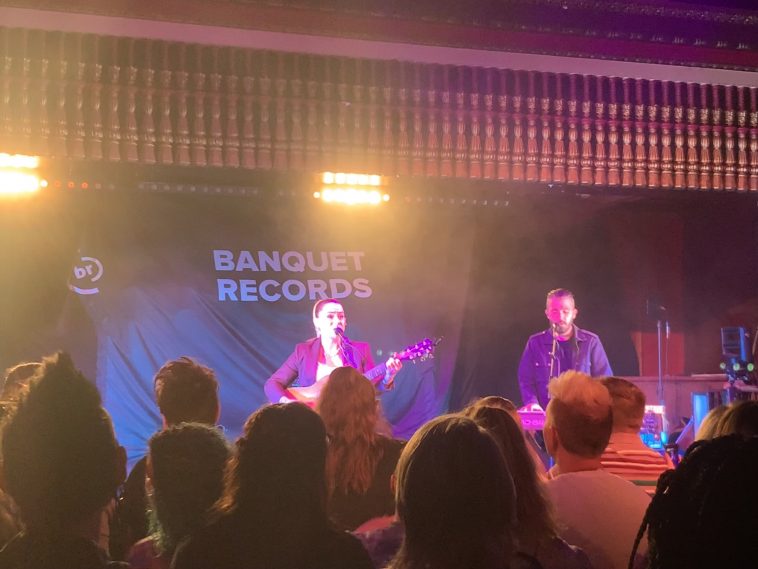 It’s been a very long time since fans have spent their day queuing up outside a venue for a Lucy Spraggan show.

On Wednesday August 11th, that nearly two-year wait came to an end as the singer-songwriter performed a headline show at Kingston’s PRYZM.

The last 18 months have been a time of chop and change for all music artists as the industry was brought to its knees, but it will have seemed like even longer for Lucy and her fans.

Since releasing Today Was a Good Day in 2019, the star has been through a divorce and become sober, two life changes she is quick to nod to on Wednesday night.

The result is very much a new look Lucy Spraggan, not just literally as she dazzles in a slick purple suit, but in terms of what she’s singing about too – latest album Choices came out earlier this year.

In her hour-long set, the singer gives time to fan favourites ‘Tea & Toast’ and ‘Last Night (Beer Fear)’, the irony of the latter not lost on the smirking Lucy although she admits she’s found a new love for the much-requested track after a year and a half of not playing it.

‘Lucky Stars’ also features and leads into a proposal in the crowd at the end and not a dry eye in sight, Lucy bats at her eyes to dry the tears away… these are the moments of live music we’ve missed so much, after all.

But where the night really comes alive are in the moments Lucy turns to Choices.

The motif of running to the hills is a recurring one on tracks ‘Run’ and ‘If I Had a God’. It’s a poignant one too after the last year – even if the crowd haven’t been running from the same demons Lucy speaks so candidly about, there’s a shared Corona-sized demon that has tested all fans in PRYZM in recent months. Though those worries are quickly blasted away with the rallying chorus of night opener ‘Run’.

The highlight of the evening comes in ‘Sober’.

The Spraggan trademark over the years has always been an honesty in her lyrics, the singer writes pop music you can really feel.

That’s taken to a new level on the introspective track, which she outlines as a reminder to herself as why she’s taken the decision to stop drinking. You can hear a pin drop as she finishes the track, her ever raucous crowd silent as they cling on every word.

As fans leave PRYZM on Wednesday night, there’s a definite feeling that there’s a new Lucy Spraggan in town.

She’s still armed with the same hits and still sounding as great as ever, but there’s a new fire in Lucy’s eye that points at a very exciting year to come.

Are you a Lucy Spraggan fan? Have you been to your first concert post the pandemic? Let us know @CelebMix on Twitter.