In his interview with Rolling Stone, Mendes talked about his journey from being a Vine star to a well-recognized pop artist he is today and about his musical influences.

At the age of 17, Shawn Mendes has achieved something many people can only dream of. Such is his popularity that his headlining world tour sold out in just six minutes. Mendes will head to Europe in April, and he’ll return to North America in July completing his European leg of Tour.

As widely perceived, Mendes’ was not an “overnight success”.  Finding an opportunity in the Internet world to showcase his talent where most people waste away their time gossiping and chatting, Mendes has created for himself a niche that constitutes dedicated fans like Ronja Brox who spread the word around of his latest gigs, new videos and best things about him. The commitment is not just one sided. Shawn Mendes makes sure that he reach as many fans as possible, trying his best to talk to them and tell them how much he loves them.

When asked how it all started Mendes said,

“I was always [online], I was one of those kids who was just always on the Internet, always on YouTube, so it was easy for me to do it. It’s not work. It’s just fun.”

An easy knowledge of the web made it less difficult for Mendes to realize what works: content.

“I was consistent with these six-second videos of me singing on YouTube, on Twitter, on Instagram,” he explains. “[I was] posting pictures all the time. I kinda didn’t know what I was doing, but I was doing something.”

Now, a teen sensation, Mendes garnered mass attention when he uploaded the cover of A Great Big World’s “Say Something”. Andrew Gertler saw it and sent the clip to sent the clip to Ziggy Chareton, the singer’s A&R at Island Records who had interned at Atlantic with Gertler during college. Gertler shared his experience of first meeting Shawn at the studio,

“He had written a bunch of songs on his own,” Gertler, who now runs AG Artists, says. “From the very beginning, he was set on the fact that he was going to write his own music and that he was a songwriter. When we heard some of these songs, everyone’s ears perked up. He was so naturally talented.”

Mendes recollection of childhood as shared by Gertler has not been pleasant. According to him,

“when he was starting to sing and starting to post covers — and this was before anything happened and before anything went viral — he would go to school and people would make fun of him,” the manager explains. “But he had his core group of friends and his family who had his back.” Jack Johnson and Jack Gillinsky who too have been going places to perform are just two names from Mendes core group. At present, they are in London where they met their mate and shared the picture on their Facebook page. YouTube covers was a way for Mendes to pursue his dream. He described it as “a habit and a fun thing to do after school in a boring town.” And we must say that Mendes is really good at his job. His rendition of One Direction’s “Drag Me Down” which he uploaded on his YouTube channel got more than a million likes.

His biggest musical influence has been Ed Sheeran from who he got an inspiration of doing covers. When asked about his idol, Mendes replied,

“Ed Sheeran wrote his songs, so I wanted to write my own songs,” he explains. On the songwriter’s appeal, Mendes admired how he avoided being too “flashy” with his music. “He’s just like an average guy and a very approachable person. I’ve actually gotten the chance to meet him, and he’s just like a very sweet guy. He is just so normal, and that’s the best part about him.”

“It’s so important in the music industry to have people that see and know the real side of you, and to have people where you know the real side of them because you get to this place where you only see the perfect side of everybody,” she explains. “I feel like it’s really cool that I have somebody where I can be like, ‘I feel really, really nervous about this performance,’ or, ‘I’m really stressing out about this thing that’s going on in my life right now.’ From the beginning, he has been one of the most supportive people that I know. He’s never too big or too focused on himself to give a compliment.” 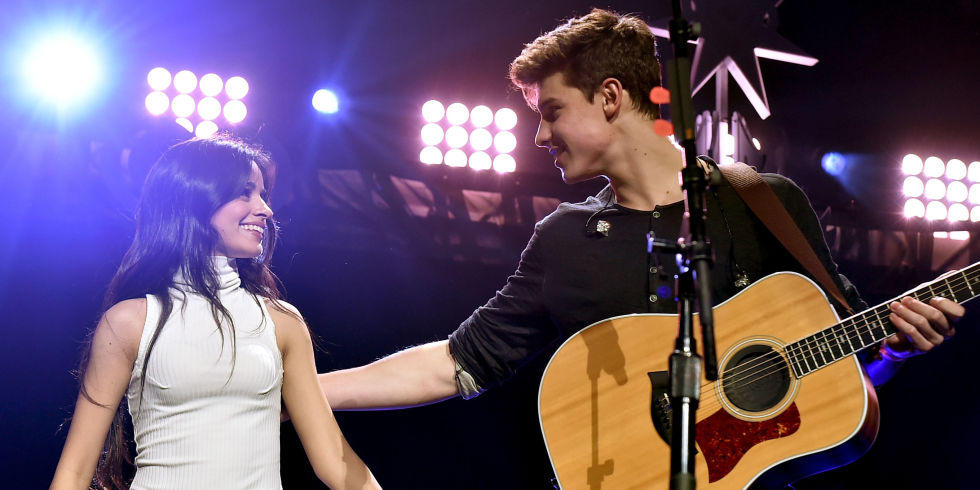 Admitting her apprehension about fan’s reaction on her duet with Mendes for the single “I Know What You Did Last Summer”, she told that she was a bit scared of the negativity that came after the single was released. What surprised and made her happy was a reaction from Shawn’s fanbase. “They were so, so sweet as she describes them. “To this day, they’ve been supportive. His fans are a reflection of him; he’s a really nice guy.”

Mendes while talking about his next album said that he’s been working with John Mayer with whom he is not only writing music but who also gave him some lessons about life. Mendes has always been confident yet a bit apprehensive of his fame which he thinks he’ll lose someday. The advice he received from Mayer was,

‘It’s OK to take time off. It’s OK to go through stages of highs and lows – that just teaches you and makes you grow as a person.’ That’s kind of helped me.

Mendes see his doubts as a motivating factor to work harder for himself and his fans. You’ll soon get to see his whole journey in his “world tour diary”, the trailer for which was released recently.

His perseverance to reach to as many people as he can through his music has made other people notice him. His hard work is yielding results and we really wish that the graph of his success would always go uphill.

How did you find the interview? Are you excited for Shawn’s world tour? Tell us in the comments or tweet   @CelebMix .