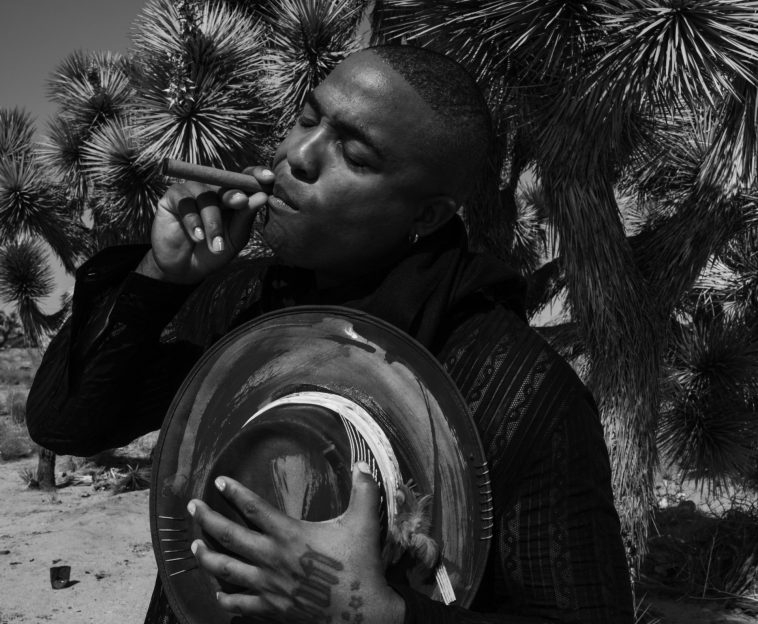 Dark, mysterious, and sexy are three words out of a huge list which we could use to describe this music video for the double single “She Get It From Her Mama” and “Preacher’s Daughter”, both from the talented star, Sam Pounds. This follows up his collaboration with Jamie Foxx, J Young MDK, Snoop Dogg & BSB Boys on the Snoop Dogg Remix of his debut release “BUD (Mowing Down Vamps)” which is music from the Netflix film “Day Shift”. He also recently dropped his follow-up single “Just Pretend” which is already his most-streamed track on Spotify with over 130,000 streams.

Sam Pounds, real name Samuel Harmonix, is a Bahama, North Carolina-born, Los Angeles-based singer-songwriter, instrumentalist, and producer, who has really been making waves in the music industry for his soulful voice and work ethic. He has performed over 200 shows since moving to LA in 2019, which is quite a feat considering the pandemic. His love of performing came when he was just three years old and his grandmother would have him sing and play instruments every Sunday for her guests. Growing up performing and learning to play instruments like the drums, the guitar, and the piano has led to his confidence as a performer and an artist, and he currently performs at the Black Rabbit Rose every Friday night and is set to go out on a national tour in 2023. As a producer, he has managed to collaborate with big names, including the likes of Jamie Foxx, Snoop Dogg, BTS, T.I., Willie Jones, and Lee Brice. Sam Pounds has a voice to be reckoned with, and he is set to become a star and his music showcases that effortlessly.

This music video – written, directed & produced by Lucas Markman – is a sexualised but gritty visual that really brings to life the style of this song and gives something unexpected to the viewers. Managing to easily draw us in from the get-go, we start off by watching Sam Pounds and his love interest, played by Jessica Jarrell, walk down a set of stairs, with flashlights, into what looks like a bar in a lavish mansion but in cut-scenes we watch his love interest break into a safe, listening to the clicks of the dial. Inside is a load of cash which they’re clearly there to steal. They celebrate by drinking whiskey and dancing on the dancefloor – with choreography created by Kamilah Barrett Forster. As “She Get It From Her Mama” ends, two men come in and grab Sam Pounds and drag him away.

The second part of the music video, which is for “Preacher’s Daughter”, starts off with Sam Pounds waking up on a beach. He starts to walk away from the beach, through some grass, and then we see him driving a motorcycle, all before we watch a poker game in play in the same bar as the previous part of the video, which sees Sam Pounds playing with Jessica Jarrell, an older blonde-haired woman, and a man with his hair tied back in a bun and tattoos on his neck. He seems to win the poker game and he celebrates by dancing with Jessica Jarrell. Cut scenes see him performing this track outside, showcasing his amazing stage energy – we honestly would love to see him live one day! We presume the poker tournament is a flashback memory, and the entire reason they snuck in and broke into the safe.

Watch the music video to “She Get It From Her Mama” and “Preacher’s Daughter” by Sam Pounds here:

Talking about “She Get It From Her Mama”, Sam Pounds said: “This is the song that gives praise to where praise is due. Don’t sleep on that bad girl’s mama.”

About “Preacher’s Daughter”, he said: “I’m extremely excited about this song. When cutting it, I flashbacked to a few of my exes back in the South growing up in church. I was the drummer at the church and truth be told, I relived my earlier years on this one, ‘cause the girl I was always chasing was our preacher’s daughter.”

“She Get It From Her Mama” and “Preacher’s Daughter” by Sam Pounds are both available to download and stream as a double single release on all platforms, right now, via The Penthouse South and Sumerian Nashville. His follow-up single is already available to stream and download right now, titled “Just Pretend” – we totally recommend you check it out too.

Let us know what you make of the music video to “She Get It From Her Mama” and “Preacher’s Daughter” by Sam Pounds on Twitter @CelebMix.