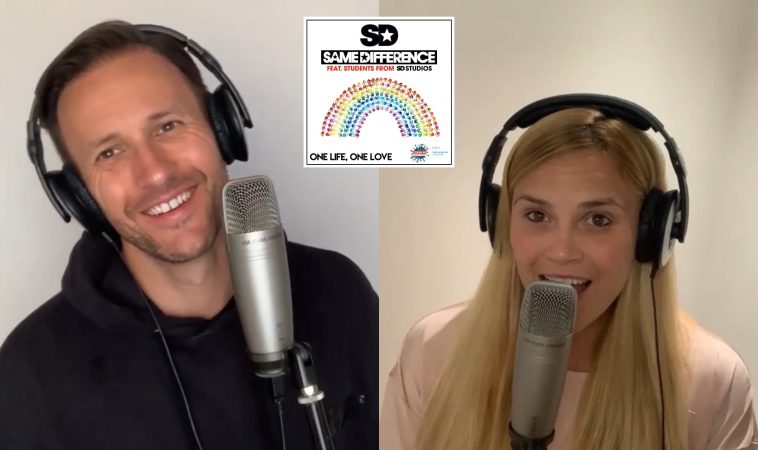 They’re back, for one time only, with the single “One Life, One Love”, Sean Smith reunites with Sarah Wilson (née Smith) to reunite Same Difference and recruits the students from the SD Studios for this charity track. The duo’s last music release was their second studio album The Rest Is History back in 2011, which was preceded by its one and only single “Shine On Forever (Photo Frame)” that was released in 2010.

Same Difference is best known for being on the fourth series of The X Factor where they came third. They went on to release two albums, Pop and The Rest Is History, and also recorded a third that continues to be unreleased. They also set up the SD Studios, which Sarah Wilson now manages whilst Sean Smith has paved out a solo career where he has released many singles, dropped his debut album – titled Solo – two weeks ago, and has been performing in pantomimes and theatre shows. It’s great to see them back together for this one-off single and to see the Students From SD Studios too.

The song has been written by John Gleadall, and they also dropped a music video for the track on Sean Smith’s official YouTube Channel. All proceeds of the single will go to the Covid-19 Urgent Appeal in aid of NHS Charities Together.

Watch The Same Difference Music Video For “One Life, One Love” Featuring The Students From SD Studios Here:

WOW! This track is so beautiful, and we’ve totally missed hearing Sarah Wilson’s voice as well as the beautiful harmonies that the sister-brother duo create. Same Difference may only be back together for this one single, but we hope it’s not the last time we hear them sing as one. The track is so special, the lyrics are superb and Same Difference impresses to no-end with their heart and passion for this song which just makes it even better, and then the additional vocals from the Students of SD Studios just powers up this track to new heights. This is one truly, unforgettable song.

The music video accompanies the track brilliantly, showcasing Sean Smith and Sarah Wilson in separate recording booths, with John Gleadall playing the piano throughout. Videos of the NHS, nurses, the emergency services, neighbours clapping, and various other scenes drive the message of the song and the fact that this is a charity single, right into our cores. When the Students From SD Studios jump in, we see multiple videos of them singing the song. This is such a special video and such a special track, that we’re glad to see Same Difference release it.

“One Life, One Love” is available to download and stream right now, through SP Music. It has already gained 8,000 streams on Spotify, alone. Please remember that buying the single from download sites (such as iTunes, Amazon, Google Play, etc.) ensures more money is raised for charity.

What do you make of Same Difference’s new single “One Life, One Love” featuring Students From SD Studios? Let us know on Twitter @CelebMix.