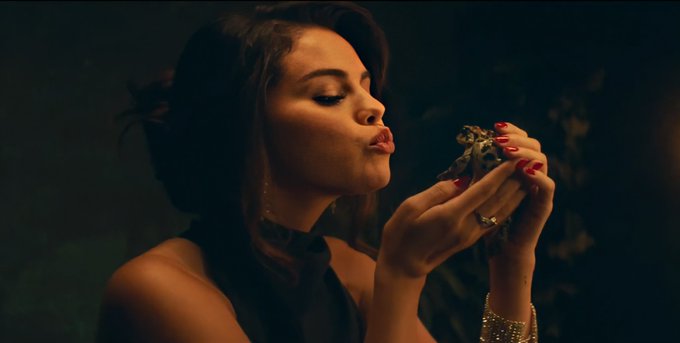 Selena Gomez has unveiled the music video for her latest track ‘Boyfriend’, and it’s safe to say that it’s pretty ribbiting.

Directed by Matty Peacock, the visual follows Selena as she heads out on a series of dates to find ‘the one’. Driving through the night with a cage of frogs in tow, she grabs a bottle of purple potion from a gang of card-playing girls before the attention turns to her dates.

We see Selena in three different date scenarios, with none of her potential suitors really hitting the mark. Putting them to the test, Selena brings out the purple potion which gives all three of her dates frog tendencies. Yep, if you’re not good enough for the ‘Hands To Myself’ singer then she will turn you into a frog.

As she drives off with even more frogs in her collection, it seems that Selena’s quest to find her prince continues!

Check out the epic music video for ‘Boyfriend’ below.

‘Boyfriend’ is taken from Selena’s newly released Rare (Deluxe), which also came out today. The track was written by Selena and her longtime collaborators Julia Michaels and Justin Tranter, as well as Sam Homaee and Jon Wienner.

Speaking about the track on social media, Selena described ‘Boyfriend’ as “a lighthearted song about falling down and getting back up time and time again in love, but also knowing that you don’t need anyone other than yourself to be happy.”

Rare (Deluxe) is available to download and stream now.

What do you think of the music video for ‘Boyfriend’? Let us know your thoughts on Selena Gomez and her new visual on Twitter @CelebMix