SANTA MONICA, CA - AUGUST 19: Actor Cory Monteith and actress Lea Michele arrive at the DoSomething.org And VH1's 2012 Do Something Awards at the Barker Hangar on August 19, 2012 in Santa Monica, California. (Photo by Jon Kopaloff/FilmMagic)

On the four-year anniversary of his death, Cory Monteith’s family and friends remember him with sentimental messages.

Lea Michele, Cory’s girlfriend and Glee co-star, tweeted an old photo of herself and Cory with the caption, “We miss you C…”. Attached to it, was an image of Lea wearing Cory’s letterman jacket from Glee while holding a black-and-white Polaroid photo of the couple.

Hard to believe it's been 4 years… We miss you C… love you more ?? pic.twitter.com/kIXoy4s4zK

Cory Monteith’s co-star and close friend, Dianna Agron, also shared a sentimental message with her followers on the anniversary. “I miss seeing you every day on set, your supreme kindness and generosity,” she writes. “I miss every bit of you.”

Heart stopped a beat realizing that today it has been four years without this wonder human. This picture is a perfect representation of how funny and mischievous you were (I mean look at that grin) I could never contain myself when you were near. I remember this moment, those funny men in hand, feeling like maybe they had read the wrong names and what were we even doing there….how were we fooling everyone, what kind of magic was this? So lucky to have had our show, our cast and you. I miss seeing you every day on set, your supreme kindness and generosity. I miss every bit of you.

Close friend and Glee co-star, Harry Shum Jr, marked the anniversary with a simple “miss you, bud” accompanied by a picture of the two.

Others who remembered Cory by posting a message online include Kevin McHale, Jenna Ushkowitz, Heather Morris and more.

4 years and our memories of you still live on so vividly in our hearts. We are so lucky to have known you. ??

The years seem to be going quicker. Can't believe it's been 4 years. Miss you bro.

It's hard to believe we took this picture over 10 years ago but it's even harder to believe it's been 4 years since we all lost this wonderful goofball. Miss ya Gunnar! #corymonteith #kaya #4years

Sometimes it feels like you'll just walk on through that door with that voice and that grin. Miss u every damn day. https://t.co/MRDYLQnrse pic.twitter.com/ME8gTt00Iy

4 years already. Wow. That heart. That smile. The absolute best. Been listening to his version of Can't Fight This Feeling on repeat today. You will forever be our candle in the window on a cold, dark winter's night. ?? 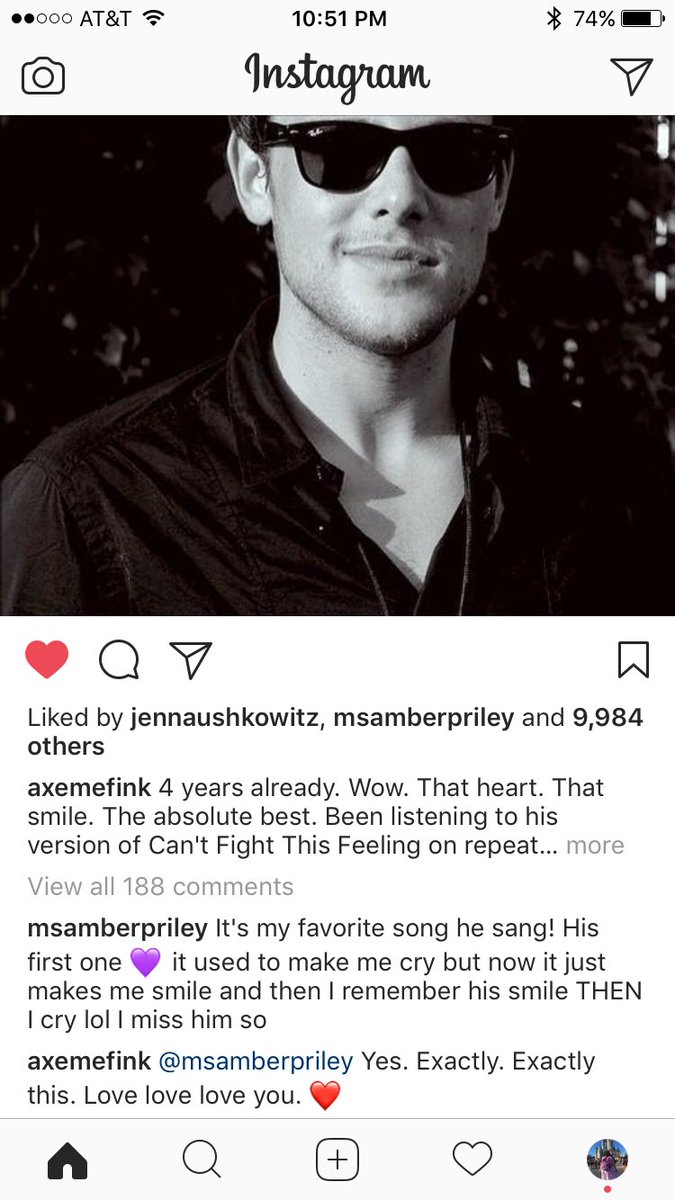 How do you remember Cory Monteith? Let us know, @CelebMix.