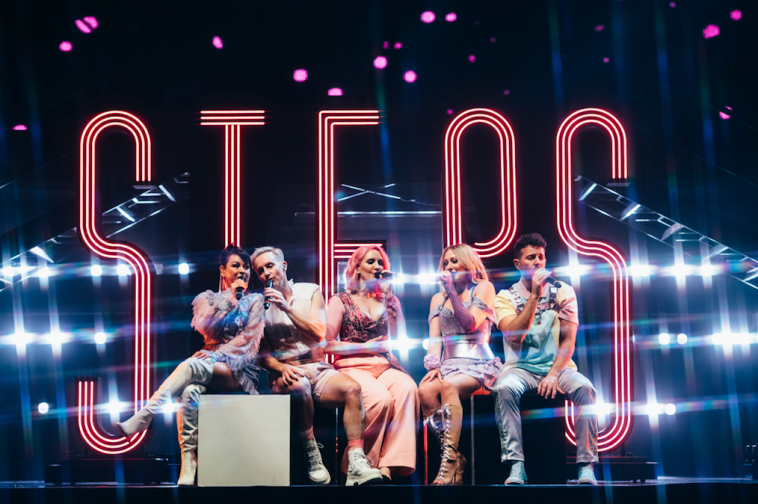 As the lights went down at the FlyDSA Arena in Sheffield on Tuesday evening, stalwart fans of pop megastars Steps could barely contain their excitement as quintet finally kicked off their eagerly anticipated What The Future Holds Tour.

Launching just one month after the group scored their third #2 album in 3 years on the Official UK Albums Chart, the bold, highly stylised and super energetic show saw Claire, Lee, Faye, H and Lisa perform reworked, contemporary versions of some of their biggest 90’s and 00’s hits, alongside new tracks featured on 2020’s What The Future Holds Pt. I and it’s follow up What The Future Holds Pt. II much to the delight of the hyped, sold out crowd!

Speaking to exclusively to CelebMix ahead of the tours opening night, Faye Tozer shared her excitement at finally being able to head back out on the road with her bandmates: “Like a lot of artists and bands, we’ve had to move this tour and the reschedule the dates so many times now, which has been so frustrating for everyone involved, not just us but for our crew, management, costume department… everyone! But, it’s finally happening… which is a relief!”

Explaining the bands creative process in creating one of their shows, the former Strictly finalist adds: “We always like to go back to the very beginning of our career, because we feel like we need, and want, to celebrate where we started. We owe so much to all of our original fans, because they are the ones who support and fought so hard to get us where we are today, so it’s important that we incorporate all of their favourite songs into the show because we don’t ever want to disappoint them. The difficulty in that though if you like, is that we have 7 albums worth of material now, so there’s always a big discussion around which songs we can and can’t we perform… and it’s so hard (laughs).”

Check out some of our favourite images from the opening night of the What The Future Holds Tour below:

What The Future Holds 2021 Tour Dates

Tickets for the remaining dates of Steps What The Future Holds Tour are available for purchase here.