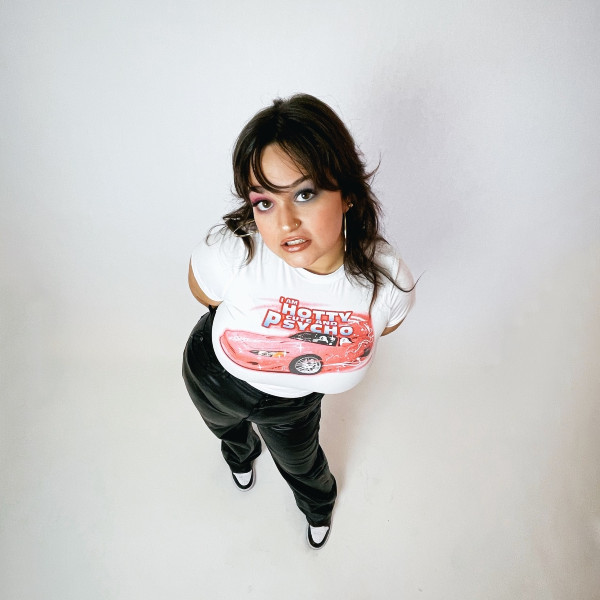 Originally from the San Francisco Bay Area, Izye grew up surrounded by music. Later, she studied voice and performed in musical theatre. When she turned 17, she began her solo career in music.

Influenced by artists such as Ariana Grande, Tinashe, JoJo, and Kehlani, Izye developed her own inimitable sound, a sound highlighted by her sumptuous, posh vocals. Highlights on the album include “bad 4 me,” “drip,” “fwmf,” and “tiramisu” with Brooke Amor.

CelebMix spoke with Izye to discover the inspiration for F**K BOYS, GET MONEY!!, her definition of tone, and how her amazing voice evolved.

My family, my friends, and music itself.

What inspired your recent album, F**K BOYS, GET MONEY!!!?

I got my heart absolutely shattered by this older guy I had been seeing. I found out through someone else that he had been seeing someone all along. I was humiliated, heartbroken, angry, and confused about why I let myself get into this situation. I really turned to music and the studio as my therapy. Whenever I wanted to text or call him, I would redirect my energy into making a new song.

Walk us through your mindset as you entered the studio to record the album.

I didn’t go into the studio preparing to make a project. I was broken and felt so alone. I really had to pull myself out of my funk and force myself into the studio, but once I was there, I felt so much better! I was there until like 4 a.m. every night just trying to rid myself of those feelings.

Everyone in my family (on my mother’s side) is a musician and both my parents are musicians, it’s just in my blood! I did musical theatre growing up as an outlet for my love of the stage and performing, but I always knew I wanted to make my own music and perform for stadiums. I really started to take it seriously when I was 17 when I released my debut single “24 Hours” and realized how much I loved the process of creating a song from scratch to the recording and mixing process. I loved it all and it gave me a high like no other!

I always knew I wanted to do something in R&B/Hip-Hop, but it took me a while to really get there. When I moved to LA and was attending school, they really pushed the singer-songwriter, stripped-down path on me, and no matter how hard I tried I wasn’t proud of the music I was making, it didn’t feel authentic to me. I was miserable and starting to hate music. Flash forward two weeks after I had dropped out of college, I met my producer, Kundo, at the restaurant I was working at. I really have to credit Kundo for encouraging me on my path to finding my sound. He helped me find my confidence in my voice, in my sound, in my flow, in my lyrics, and in my music. He taught me how to record efficiently and quickly and always kept me included in the production process. I really wouldn’t be where I am today without his help.

What is your definition of tone? And has your tone changed over time?

Depending on how you use it, tone can mean a lot of different things, but to me, it has to do with pitch, quality, and strength. My vocal tone has changed SO MUCH over the years. I started vocal lessons when I was 12 after my mom pushed me to do it for years and trained in musical theatre for almost 5 years. When I was 17, I switched vocal coaches to start on my more pop sound/technique. In musical theatre, the tonality is usually very bright, wide, and articulate, whereas pop and R&B are usually darker, free, and use more nasal tones. And when I finally got the confidence to start rapping in my music, I really had to find the tonality of my rapping voice. I didn’t wanna sound like I was trying to be someone else, I still wanted to be me. Now I feel I’m in a place where I have mastered my tone since I have matured so much vocally and have had time to experiment with my instrument.

I mainly write about real-life experiences, like I said earlier, music is my therapy. However, when it comes to lyrical themes, I love to steal certain lines from songs to use in my verses as reference. I’ve done it with JoJo, Rae Sremmurd, Kehlani, etc.

Honestly, I feel I need to shout out my fellow Bay Area girlies who are killing it right: Thuy, Ashley Mehta, Destiny Rogers, & Lolo Zouaï. I grew up in the same town as Thuy and (and attended high school at the same time as) Ashley Mehta. It inspires me to know they started where I started and have built this success for themselves.

I believe success is happiness and being content with yourself and your journey. I don’t need likes or a blue check mark to tell me whether or not I will go far.

I’ve already started working on new songs, so obviously gonna be dropping a ton of singles this year. I have another music video for my song ‘tiramisu (feat. Brooke Amor)”’ in the works right now, and of course, will be doing tons more gigs! I currently have two lined up this year so far: 2/13 at El Cid on Sunset with FeverDreamLA, and 3/21 at The Hotel Cafe for Writers Block Songwriters, which will be a stripped-down gig!