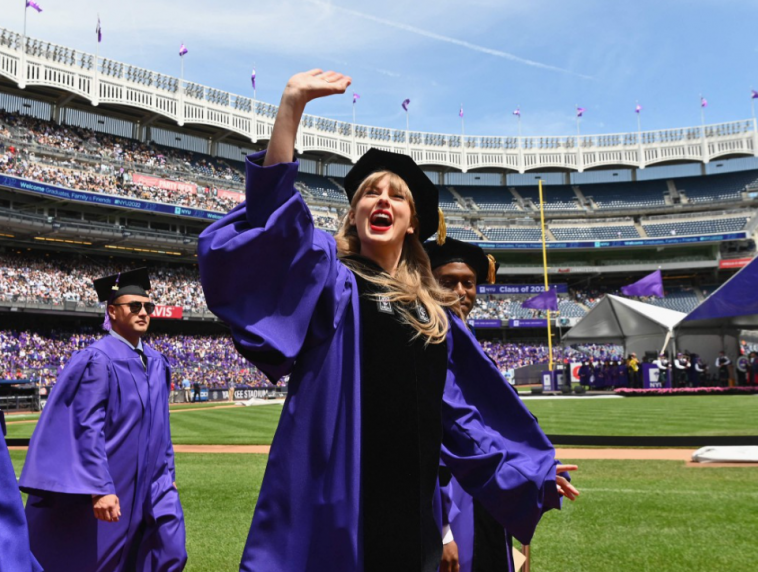 Taylor Swift is now a doctor!

No, not that kind of doctor, but she did earn an honorary doctorate degree in Fine Arts from New York University on the morning of May 18. Along with the class of 2022, Swift put on a cap and gown and walked into Yankee Stadium to celebrate her accomplishments in the music industry and beyond.

“I’m trying to tell you that losing things doesn’t just mean losing. A lot of the time, when we lose things, we gain things too.” – our Honorary Doctorate ??

Others were there to be given an honorary doctorate degree as well, but she was the one who was picked as the speaker. After receiving her degree, she gave a heartfelt speech, which was nearly 22 minutes in length, about life lessons and her time in the industry.

Although she did not attend college, Swift has wanted an honorary doctorate degree ever since 2016, when one of her best friends, Ed Sheeran, got his, as she revealed in her 73 Questions With Vogue Interview. And now, her wildest dreams came true.

“I was a teenager at a time when our society was absolutely obsessed with the idea of having perfect young female role models,” the 32-year-old addressed the graduates.

“I became a young adult while being fed the message that if I didn’t make any mistakes, that all the children of America would grow up perfect angels. However, if I did slip up, the entire Earth would fall off its axis, and it’d be entirely my fault. … It was all centered around the idea that mistakes equal failure and ultimately the loss of any chance at a happy or rewarding life. This has not been my experience.”

The speech was filled with serious moments, like the one above, plenty of jokes and personal anecdotes, with references to some of her songs including “Welcome to New York” and “22 (Taylor’s Version),” fittingly enough.

And although Taylor is not a doctor in the sense of she could perform heart surgery or give you a medical diagnosis, she is a doctor in music and songwriting and can help you in case you are in an emergency situation where you need, “to hear a song with a catchy hook and an intensely cathartic bridge section, or if your emergency was that you needed a person who can name over 50 breeds of cats in one minute.”

The ceremony, which was live-streamed online, honored graduates from 2020, 2021, and 2022, since the ceremonies were postponed the last two years due to COVID-19.

Although she can be seen throughout, Taylor is awarded her honorary degree at 2:47:35. After that, she gives her speech.

The 11-time Grammy winner ended her speech with, “We’re doing this together. So let’s just keep dancing like we’re the class of ’22!”
Along with Swift getting an honorary degree at the prestigious university, the school also offered a class this year at its Clive Davis Institute. The class covered her evolution as a “creative music entrepreneur, the legacy of pop and country songwriters, discourses of youth and girlhood, and the politics of race in contemporary popular music,” Variety first reported. She had been invited to speak to the class, but instead spoke at graduation.
Congrats to Dr. Swift and all of the 2022 graduates!

Did you watch Taylor Swift become a doctor today? What was your favorite part of her speech? Let us know on Twitter at @CelebMix.