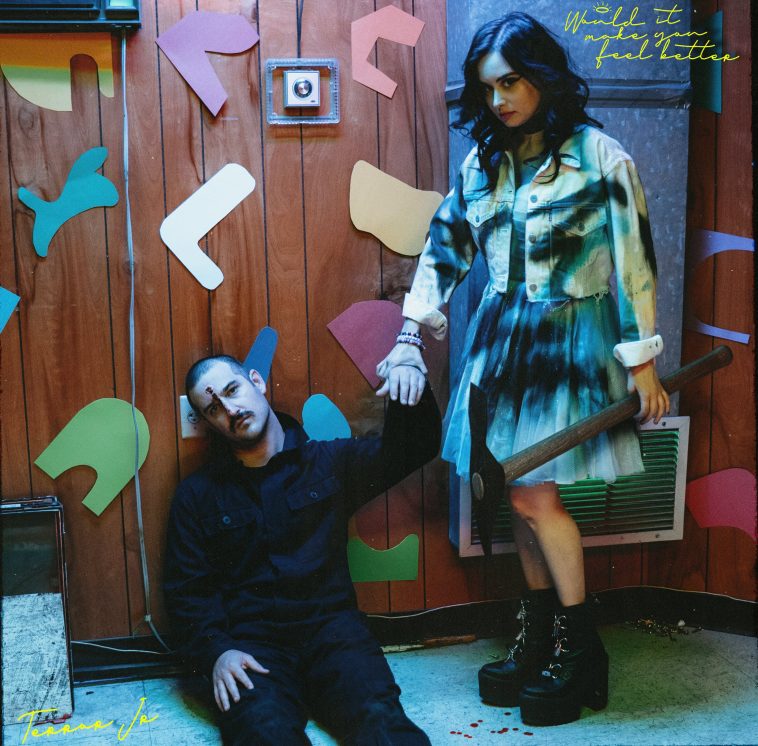 We probably listened to Terror Jr’s latest single for the millionth time already while typing this so excuse the slight bias in these words BUT: this might be the one. The big(gest) hit.

Terror Jr already served us pop greatness on a “Dinner Plate” for release #1 from upcoming studio album “Rancho Catastrophe”. For the second lead single, the duo promised something “faster”. Which is always good. We just didn’t know that it would make you feel that good.

Terror Jr’s latest release is called “Would It Make You Feel Better” and it is the feel-good bop that we needed. Filled with a stomping, disco-tinged beat, infectious lyrics and Lisa’s sweet saccharine vocals, this record is pop at its best. It will make you want to get up and dance and sing your heart out with joy.

There’s no better way to celebrate New Music Friday and the start of the weekend than by listening to this song (which you should)!.

Listen to the new song right here and be ready to feel better immediately:

The new release comes paired with an accompanying music video, which was directed by Chris Simmons. The trippy visuals take us into the kingdom of trash princess Lisa who starts a dance party while (literally) taking out the garbage. Campa also appears in the video as a janitor.

Watch the music video right here. It’s as fun as it is ludicrous:

“Would It Make You Feel Better” was released via Grape Music / Opposition. It is now available for purchase and streaming on the digital retailer of your choice. You can find your preferred one by clicking here.

The song was written by Terror Jr and produced by Lincoln Jesser. It arrives as the second lead single to their second record “Rancho Catastrophe”, due later this fall.

Are you feeling better already because of Terror Jr’s new song? Share you thought with us, either on Twitter @CelebMix or on our other social media channels.