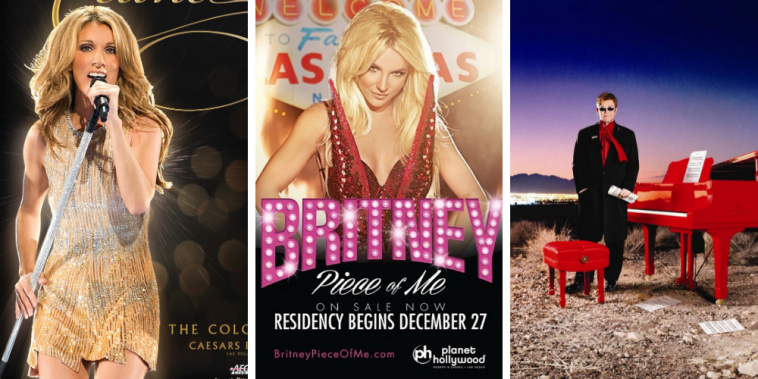 Las Vegas is a city known mostly for its giant hotels, resorts, and casinos. However, it’s not just gambling that makes Vegas so famous as the city is home to concert residencies by dozens of successful musicians. Take a look at the four most successful Vegas residencies here.

Celine Dion tops the list with her A New Day… residency which took place at The Colosseum at Caesars Palace between March 2003 and December 2007. The residency, which made around $474.72 million, included some of Dion’s most successful hits including ‘The Power Of Love’, ‘My Heart Will Go On’, ‘River Deep, Mountain High’, and ‘Taking Chances’.

The residency received mixed reviews when it first began as people criticised the show for not having a balance of show and theatre. By the time the residency came to an end, however, Celine Dion had grown more comfortable with the show, transforming it into a large-scale pop show rather than the Cirque du Soleil-inspired performance director Franco Dragone had originally launched it as.

By the way, Celine Dion is one of the few artists whose music is so popular that it has been used across a variety of products. Talking about Las Vegas and gambling; the company Bally took the 1997 movie Titanic along with Dion’s song ‘My Heart Will Go On’ as a blueprint for developing an online slot game. Users can play for real money spinning the reels with images of Jack, Rose and the ‘Heart of the Ocean’, as reported by Casinos to Play.

Elton John’s The Red Piano is the third most successful Vegas residency. The concert ran between February 2004 and April 2009, and it made $201.4 million. The Red Piano included most of Elton John’s hits including ‘Rocket Man’, ‘I’m Still Standing’, ‘Candle In The Wind’, and ‘Tiny Dancer’.

The concert was planned to feature 75 shows over three years at The Colosseum at Caesars Palace but John ended it early in April 2009. Elton John was praised for his theatrics and performance, and the show was so popular that John took it to Europe as part of a worldwide tour between late 2007 and 2009.

Celine Dion’s ‘Celine’ at The Colosseum at Caesars Palace

The second most successful Vegas residency is one again by Celine Dion. The Celine residency took place at The Colosseum at Caesars Palace between March 2011 and June 2019. It made $296 million and received plenty of positive reviews for Dion’s grandiose yet intimate performance as well as the show’s theatrics.

Like A New Day…, Celine featured all of Dion’s classic hits as well as several medleys featuring covers of popular songs such as ‘Uptown Funk’, ‘Don’t Stop Till You Get Enough’, ‘We Are Family’, ‘Groove Is In The Heart’, and ‘Sex Machine’. Unfortunately, the show was put on hold between March 2015 and August 2015 following the death of René Angélil, Dion’s late husband and former manager. When it resumed, the show included new musical elements as well as a brand new look.

Britney Spears’ ‘Britney: Piece Of Me’ at The AXIS

Britney Spears’ Britney: Piece Of Me is one of the most successful Vegas residencies. This special concert took place at The AXIS in Planet Hollywood and made $142.9 million between December 2013 and December 2017.
Britney: Piece Of Me featured most of Britney’s hit songs including ‘Womanizer’, ‘Me Against The Music’, ‘Toxic’, ‘Oops!… I Did It Again’, and more. The show was a huge hit and saw Spears win the Best of Las Vegas award in 2015 and 2017. In fact, Britney: Piece Of Me was so successful that it’s been credited for expanding Vegas’ nightlife and attracting younger crowds to the city. Its success also inspired other musicians such as Jennifer Lopez, Lady Gaga, Backstreet Boys, Pitbull, and Mariah Carey to launch residencies.