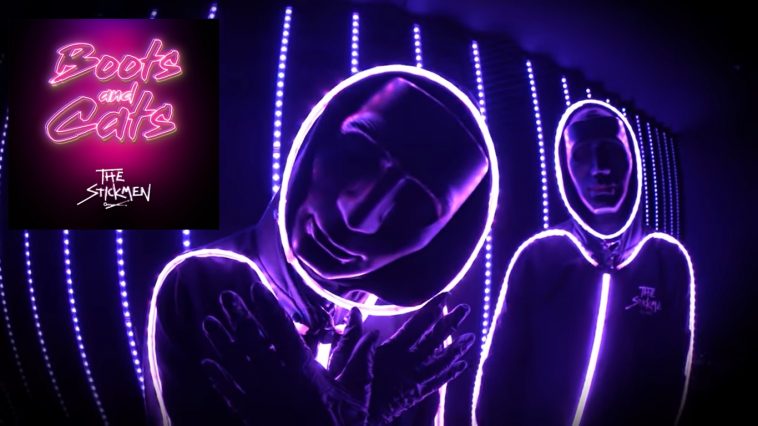 We’ve been waiting for The Stickmen to drop their debut single, and here it is, titled “Boots And Cats”. The duo have been playing shows all over the world for years, and has been remixing some of the biggest hits, now we finally have a song from them to add to our party playlists.

The Stickmen are a DJ and drummer duo who are absolutely fantastic live as they incorporate live elements into their sets, as well as neon LED lights, such as their stickmen suits, that really makes their gigs ones you do not want to miss. They’ve dropped various remixes and mashups on their SoundCloud account which are available to download for free, and last year saw them officially release a remix of Meduza & Goodboys’ hit single “Piece Of Your Heart”. Now, with the release of their debut single, “Boots And Cats”, we’re excited to see where their music career takes them next.

According to Spotify, “Boots And Cats” has been written by Blue Stickman, Green Stickman, and Jon Maguire. An accompanying music video for the song was also released which looks more like an at-home session with The Stickmen where they easily showcase their performance vibes and why you need to see them live.

Watch The Music Video To “Boots And Cats” By The Stickmen Here:

The song goes in hard with The Stickmen not afraid to show us exactly who they are with this track, whilst still keeping their anonymity throughout. The video opens up with one of The Stickmen asking Siri (Apple’s virtual assistant) if it can beatbox, Siri replies with “Here’s one I’ve been practising… Boots and cats”, which starts off the entire song with the repetitive three words from Siri making up all the lyrics of the song.

Throughout the rest of the song and the clip, The Stickmen give enormous energy with infectious beats that make you want to move. Their LED neon lights change colours, lighting up the visual in many different ways. This video alone makes us want to see them live again, and now that they’re releasing original music we’re excited to hear “Boots And Cats” amongst their DJ sets.

“Boots And Cats” has been independently released by The Stickmen and is available to download and stream on all platforms.

What do you make of The Stickmen’s debut single “Boots And Cats”? Let us know on Twitter @CelebMix.