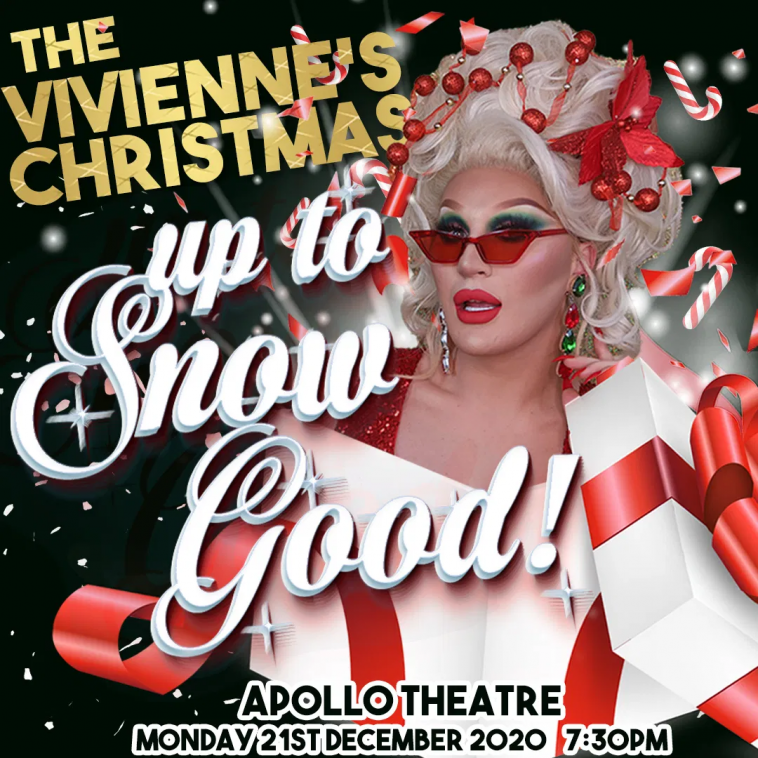 The Vivienne, the winner of the first series of RuPaul’s Drag Race UK, is set to perform a special Christmas show in London’s West End.

Titled ‘The Vivienne, Up to Snow Good’, she will be joined by Miss Tiara and a host of male dancers on Monday 21st December. The Liverpudlian drag queen will be bringing comedy, impersonations, classic Christmas songs and some much needed festive cheer to London’s Apollo Stage, the current home of critically acclaimed show Everybody’s Talking About Jamie.

I’m so excited be back on a beautiful stage, the home to Everybody’s Talking About Jamie! So bring your mistletoe, no kissing, its a Completely COVID safe theatre experience, Hang your stockings & let’s jingle some balls!

To keep the show COVID safe there is a maximum of six people per group. When booking tickets, the online ticketing system ensures the space around selected seats remains unavailable to ensure social distancing inside the venue. A one metre plus distance between groups is required at all times. The venue will be practicing contactless ticketing, staggered arrival times, one-way systems and pre-ordered drinks. Face coverings are required at all times, aside from when audience members are eating or drinking.

It’s definitely been a successful year for The Vivienne! After winning the BBC Three/iPlayer show RuPaul’s Drag Race UK late last year, she flew to LA to film ‘The Vivienne Takes On Hollywood’, wherein she filmed her debut pop video and was coached by well known producers, choreographers, voice coaches and acting gurus. On top of that, she has filmed a Netflix show and has been releasing well-received music, such as her latest single Spin Me Round.

Are you excited for this Christmas Extravaganza? Let us know @CelebMix on Twitter!