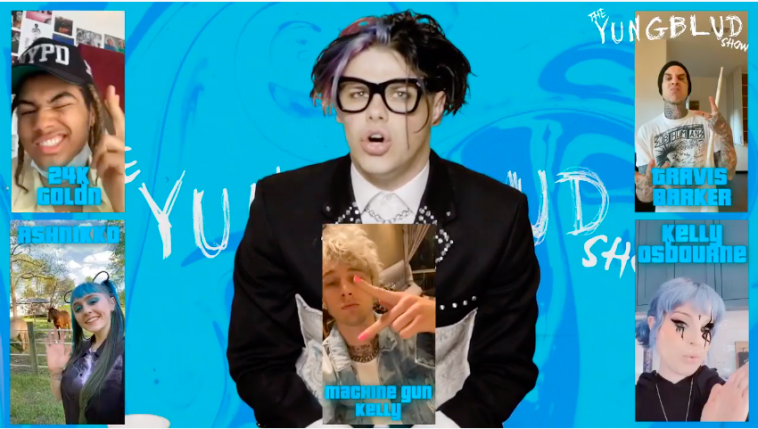 YUNGBLUD has been busy entertaining his fans during lockdown with a second episode of The YUNGBLUD show.

Streaming at 3pm on YouTube yesterday, the 30-minute show was watched live by over 50k fans, with #TheYUNGBLUDShow trending at number one in the UK, Poland and Australia.

YUNGBLUD was joined by special guests Travis Barker, Kelly Osbourne, Ashnikko, 24kGoldn and Machine Gun Kelly. In addition to covers of Sublime’s ‘What I Got’ and the Rolling Stones’ ‘Wild Horses’, YUNGBLUD and Kelly teamed up for an ice bucket challenge in aid of Centrepoint, raising £5000 for the youth homelessness charity.

Speaking about the show, YUNGBLUD said “obviously it was a little difficult because we were working from home, but we gave it everything we got. The response from our incredible fanbase was overwhelming. I’m surprised every time from their countless support. Massive love to all the guests for jumping on the show.”

If you missed out, or simply want to relive the fun then you can re-watch the show below.

Earlier in the week, YUNGBLUD also shared a video of his sold-out O2 Academy Brixton show on YouTube. The gig, which took place in November last year, saw the Yorkshire artist perform to a crowd of 5000 in his largest show to date. Whether you were at the gig or want to check it out for yourself, the whole show can now be enjoyed below.

If that wasn’t enough, YUNGBLUD has also confirmed that he will be releasing a new single called ‘Weird!’ on April 22nd!

Did you enjoy the latest episode of The YUNGBLUD Show? Are you excited for ‘Weird!’? Let us know on Twitter @CelebMix