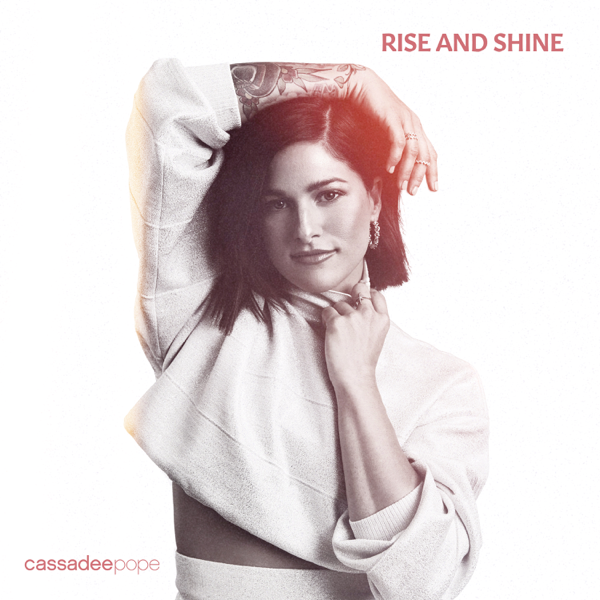 This week saw Cassadee Pope released her brand new album, titled Rise And Shine. It is her third album overall and follows up last year’s album, stages. Four of the tracks were released as instant-grat singles in promotion of this album.

Cassadee Pope has been in the music industry for over a decade, launching with her band, Hey Monday, in her early years, before they went on hiatus and she decided to compete on the third season of the US version of The Voice – which she won. Following that, she released a few singles, a debut album (Frame By Frame) and a sophomore album (stages). She’s been steadily building herself a career in the country music world, which certainly isn’t easy for female artists, and her third album just proves that she’s a staple of female country and with a Grammy nomination under her belt, thanks to a collaboration with Chris Young on the song “Think Of You”, Cassadee Pope is set to become a country music legend.

There are eight tracks on this album, one of which includes a feature from her partner, Sam Palladio (best known for playing Gunnar Scott in Nashville) – talk about a perfect country collaboration. Prior to the official release of the album, four tracks were released as instant-grat singles, these were “Let Me Go” and “Built This House” on 26 June 2020, and “Hoodie” and “Counting On The Weather” on 17 July 2020. Since all eight tracks are phenomenal and extremely personal, we have decided to write up a track by track review of the album.

This is the perfect track to kick-start the album as it’s fully stripped back with an almost acoustic sound to fully showcase what this album is all about. Cassadee Pope shines in every single way with her absolutely stunning vocals that are full of emotion, hitting us right in the heart with every single word. The chorus is beyond catchy and one you’ll so be singing along to by the second play. Such a personal and emotional track where Cassadee Pope is asking her lover to let her go as he doesn’t get her anymore – this is mainly in reference to Big Machine Records which she left after her debut album because they didn’t get who she was.

An upbeat fun song, “Hoodie” is the one track on this album that we could have on repeat for days on end. It has this subtle summer country anthem vibe to it, with the guitar chords creating this jovial theme. The song is all about reminiscing about a past love after finding his hoodie in the backseat of her car. It’s such a story-telling song and so sweet that we can all identify with one way or another. This would be the perfect song to make a music video for.

A match made in heaven with this duet, Cassadee Pope and Sam Palladio are absolutely amazing together, with harmonies that will melt every part of you. “California Dreaming” is the country ballad duet we’ve been needing in our lives, that definitely epitomises heartbreak and how much it can hurt. We believe this song is about her ex-fiance, Rian Dawson from All Time Low, whom she had been in a relationship since 2010, until they became engaged in February 2017 before ending the relationship in July 2017; by the end of that year, Cassadee Pope started a relationship with Sam Palladio. It goes to show how strong their relationship is, and Sam Palladio’s support of Cassadee Pope, not only in this song but overall, is certainly couple goals.

Counting On The Weather

We’ve all been there, in love to the extent where you just want to lye in bed next to the person you love all day and night, not wanting time to go by so you can spend it with each other for forever and ever, that’s the story behind “Counting On The Weather”, and it is such a sweet song. A relaxing country track that just inspires chilled out vibes from beginning to end.

Sounding more like an incomplete demo that hasn’t quite been finished through post-production, “Hangover” is a unique country track that has the essence of a brilliant song but it just feels unfinished like it was rushed. Regardless, Cassadee Pope knocks it out the park with her voice and this chorus is certainly stuck in our heads. The guitar that is running in the background keeps the flow of the track but it does feel messy throughout, however we believe this was all done on purpose since it feels like the track itself is dealing with a hangover. Unique, clever, but not to everyone’s taste, this one stands out regardless.

The title track of this album, and Cassadee Pope explained what the song was about on her Instagram, stating: “No matter what comes in your way in life, no matter what obstacle, you have two choices, you could, 1) Let it defeat you and crumble, or you could, 2) Rise and shine, and take advantage of this opportunity to grow and build something better for yourself.” That really sums up this entire track, it’s an encouraging track that we all needed, especially this year more than most. Cassadee Pope has always inspired her listeners with self-motivational tracks and this is another one to add to her collection. She certainly rises and shines on this track, her vocals are seriously off the chart and this sounds completely magical! WOW!

Our favourite song on the album, “Sand Paper” encapsulates a relationship that she’s walking away from, one where it was all one-sided and how he tried to change her, but instead of changing who she is, she’s walking away. Another strong and empowering track that many of her listeners can identify with and will certainly help them to walk away from such toxic relationships. We feel this track in our bones with every single lyric, it’s one polished song that deserves to be an official single and have a music video to accompany it. We have been listening to this song on repeat for the last week or so.

This is a big metaphorical song, because as far as we know, Cassadee Pope hasn’t actually built a house, instead she’s built a career and life for herself, and we have followed her every step of the way – or should we say every brick she has placed? It’s a strong and powerful track where she also sings about things that has held her back or stopped her from being who she wanted to be and how she left them behind to become who she is today. She’s such an inspiring artist and this song just proves that. Addicting and strengthening, this is another track we’ll be singing out loud when we’ve built our own metaphorical house.

A solid album from start to finish, Cassadee Pope has really delved in deep for these eight stunning tracks, showcasing her brilliant vocals, emotional integrity, and songwriting ability. Using her past experiences within the music industry, her past relationships and friendships, and her thoughts and feelings guide her through these tracks, Cassadee Pope proves her worth with this album. Rise And Shine really showcases the sort of artist Cassadee Pope is and we are living for it in every way.

What do you make of Rise And Shine by Cassadee Pope? Let us know on Twitter @CelebMix.