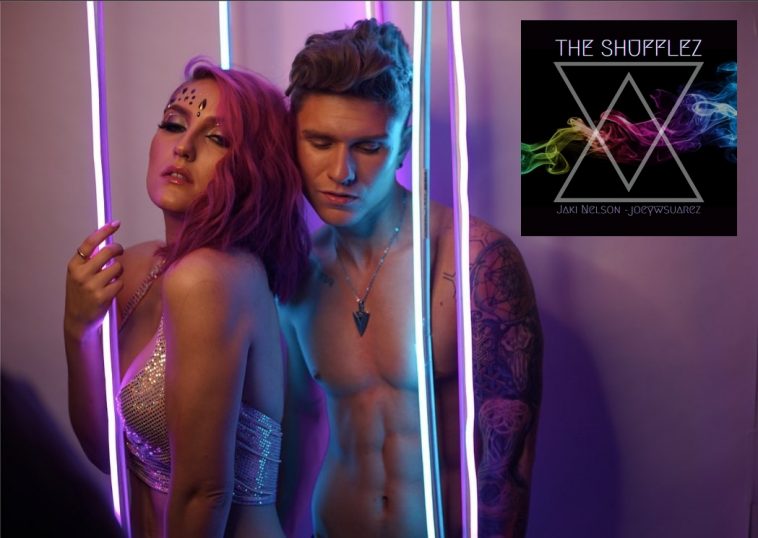 This week saw Jaki Nelson & Joey Suarez release their debut album, THE SHUFFLEZ: VOLUME 1. This awesome seven-track collection is available to purchase through Joey Suarez’s website, and he has revealed another album is on its way for “The Shufflez” that will contain longer tracks. This follows up their recently released single, also titled “The Shufflez“.

The former model turned singer, Joey Suarez has been focusing on his music career for a few years now. He has gained popularity through Instagram and TikTok and in the process has been promoting the album The Shufflez for the past few months, volume one of which is currently out now and is available to buy from his website. He has revealed he has been working on follow-up albums too with volume two of The Shufflez on its way soon.

As for Jaki Nelson, she is a rising singer and producer who went viral after raking 2 million Spotify streams on the My Buddy Mike remix of her collaboration with Jason Parris on the song “Yours”. She has worked with some of big names in the music industry, including Dave Audé, Lauren Dyson, and Disco Fries. Both these artists are definitely ones to watch in the coming years.

Each track deserves its chance to shine, with Joey Suarez claiming that each song is perfect for Instagram and TikTok videos because they’re short, allowing you to use them on social media. A lot of work went into every track, so let’s check them all out.

The official title track and leading single from VOLUME 1 is sure to get you up and dancing from the very first few seconds. Spreading “The Shufflez” around to their listeners, Jaki Nelson & Joey Suarez gives us an infectious tune and an iconic lyrical sentence that we’ll be using all the time, “I’ve got a case of the shufflez” – we all do now that we’ve heard this opening track. It’s impossible to stay still as soon as you hear this. Perfect opening track!

Unstoppable techno house with sultry, sexy, whispering vocals from Joey Suarez gives “Polly Pocket” this unforgettable quality. Jaki Nelson contrasts with KALIPZO’s awesome vocals throughout and gives a production like we’ve never heard before. The driving beat really hooks the listeners in on this one and makes us want to record a TikTok video with this sound, right this second.

If there’s one shuffle dance we all know, it’s the Running Man, and we can all do it, or we’ve at least tried to do so. These two talented artists have created a track just for that dance move alone, and we are living for it. The dance was big in the ’80s and crossed over into the ’90s but gained huge popularity for a second time in the ’00s, and this is a great ode to the unforgettable move that still stands the test of time. How can you not shuffle to this one?

Joey Suarez promised a bit of jungle house, but we weren’t quite ready for this one as the pure instrumental track appears in the middle of the album. Slow and groovy with a killer beat, “Jungle Jam” stands on its own merits and empowers the listener in the best way possible. This is exactly what we needed to hear, right at this moment, and with that, we’re now buzzing for the next track.

Fans of Jaki Nelson and Joey Suarez may recognise this one as it is taken from their previous single “Never Coming Down”, only shortened to a one-minute track and giving a whole different vibe compared to the original track. Sensual and sexy, with an over-produced beat that adds flavour and addictiveness to the track itself, “Never Come Down” is one of those songs that will be stuck in your head days later.

“OOH B!TCH” is dance music at its finest. Both artists impress with this number, giving us the perfect song to dance the night away with. Stylish and sassy, this is one you’re going to have to add to your party playlists a number of times just to add that special sparkle between tracks, as it’ll be a listening experience people will never forget.

Another one of their previous singles, this time “Changing History”, that has been melted down to just one minute long; and, yet again, it’s been switched up to an addictive force which we could listen to again and again. Originally, this track completely shines, especially on a dancefloor, but as a short track, listeners are mesmerised as the brilliant production takes centre stage prepared to make you shuffle like never before. If you didn’t have a case of The Shufflez by now, it’ll be this track that tips you over the edge.

Overall, Jaki Nelson & Joey Suarez has totally, 100%, delivered on their album THE SHUFFLEZ: VOLUME 1! They have given us some great, addicting house tracks that will surely get us all moving and living it up. Full of life and energy, this is one album you need in your life, and we cannot wait to see what these two brilliant artists bring to the table with volume 2!

THE SHUFFLEZ: VOLUME 1 is available to buy from Joey Suarez’s online store, where there is also a tonne of amazing and different merch available. If we had the money, we would so buy everything! Look out for THE SHUFFLEZ: VOLUME 2, which is no doubt on its way, and is bound to be even more epic than the first volume, be prepared!

What do you make of Jaki Nelson & Joey Suarez’s debut album THE SHUFFLEZ: VOLUME 1? Let us know on Twitter @CelebMix.