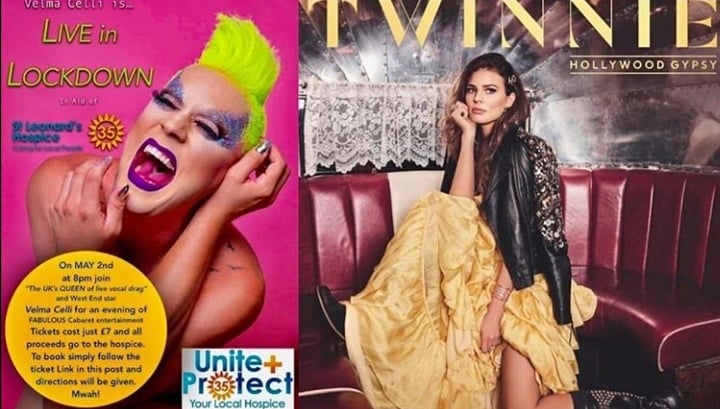 This Saturday, (May 2nd) York country music singer/songwriter Twinnie will join West End and live vocal queen of drag Velma Celli for a special showcase streamed live with all proceeds going to the St Leonard’s Hospice.

The York hospice cares for vulnerable people in the local area and due to the ongoing Coronavirus (COVID-19) global pandemic, they are in need of donations and support right now more than ever before.

So, local drag artist Velma Celli has launched the Live In Lockdown gig with an aim of raising vital funds for St Leonard’s so they are able to continue caring for those in need at this time of crisis and going forwards. The hospice cared for Velma’s mother during her last days so it is an especially poignant fundraiser.

The announcement that the cabaret night would also feature Twinnie was confirmed by Velli via social media with the caption: “Thrilled to announce that the insanely talented Twinnie will be joining me as a special guest for my live stream gig” – this was following confirmation of the live showcase made earlier by the performer.

Speaking about the hospice, Ian Stroughair aka Velma Cellie said: “Unfortunately too many of us have seen the amazing work of the team at St Leonard’s Hospice first hand, as loved ones including my mum spent time there”.

Twinnie, who earlier this month released her debut album ‘Hollywood Gypsy’ will join the stream, with a secret link being sent to ticket holders on the night.

Tickets for the Saturday event are on sale now priced at £7 with all proceeds going directly to St Leonard’s Hospice.

Are you going to be streaming the charity gig this Saturday? Let us know your plans across social media!