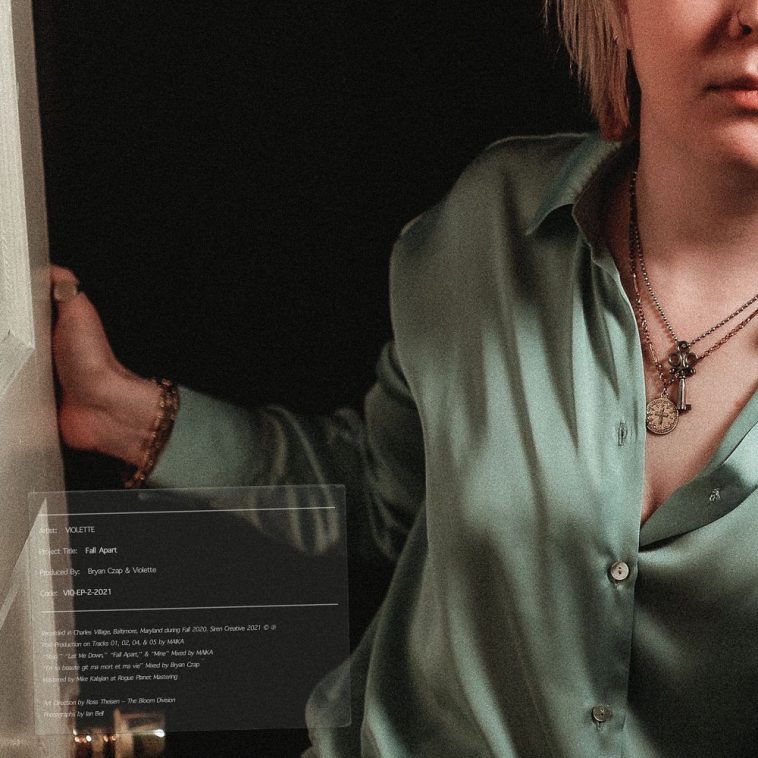 “When I was deciding to pursue a solo career, I was on the phone with my partner and manager discussing the idea,” Violette tells CelebMix at the top of our chat about her new single, ‘Stop’. “Across from me was my record collection and the National’s “High Violet” kept glaring at me. I was thinking of what name to use and that moment kept crossing my mind, so it’s the main inspiration behind my name.”

As far as who Violette is, that answer is ever-evolving. Violette is the type of artist who feels best when performing and creating and being Violette, so today that means that Violette is where she feels the safest to explore herrself.

“Thank you so much! It is AMAZING to finally have “Stop” out in the world,” Violette expresses to CelebMix. “It’s the first song that was finished for my upcoming EP, “In her beauty lies my death and my life,” and the song that set the tone for the rest of the EP.”

I recorded it in my home in Baltimore with my partner producing it, so we hadn’t really shared it with anyone before it was released and the feedback has been so wonderful.

Violette on her new single

As a story, “Stop” is about being the other person and welcoming it, even though it’s something you shouldn’t be doing. It’s almost like the old saying about accepting the love that you think you deserve; you know you’re being manipulated and used, but you feel like that’s just what you have to put up with because you feel like you’re in love. The title is a double meaning – the lyrics are “So, baby say “stop” if you want to stop,” meaning you’ll go along with it as long as they will, but it also is a reminder that maybe you should be the one to stop and get out.

“With this song, I didn’t have any clue of what I wanted it to say or mean,” Violette reveals about the initial creative process of the song. “It was one of those times where once the music started coming together, everything else just came together. The instrumental determined what the lyrics were going to be about and once I had a grasp on the story I was telling, it just told itself. I think the song is exactly what I was hoping it would become.”

This song started from just creating a loop and adding in some random sounds. Violette had an acoustic guitar in her hand, so she mic’d it up and just recorded her hitting it and doing some different things with it. Once she started diving into it, it took on a life of its own, and the melodies and lyrics just kind of hit her. “It was definitely one of those experiences where the song falls right into place,” Violette adds. “It was the first song I finished for the EP and it was made in my home, with just my partner and I producing it which was a first for me.”

“I like to say that you have to live life in order to write about it,” Violette says. “So, while the situation may or may not be something that’s happened in my life, the feelings are 100% real and authentic.”

Regardless of if you’ve ever been “the other person” in a romantic relationship, everyone has felt that way in their life whether it’s a relationship with a friend, family member, or partner.

With this song, Violette hopes that listeners will find something that they can relate to, whether that’s the feeling you get from it, the story she is telling, or just how they relate to it personally.

“My favorite thing about music is that there’s always different meanings that I get from every song,” Violette continues. “Sometimes it means one thing and when I revisit it, I feel a completely different thing. I just hope that this song finds someone when they need it.”

Right now Violette is working on her live show and getting ready to get back to performing! Along with that, she is releasing her 2nd EP in August and has singles dropping. She also has some plans to get back to writing and hopes to release more music this winter!