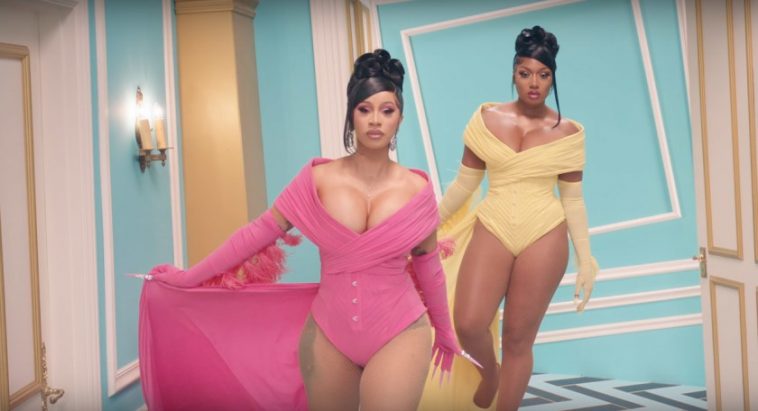 In a year where female collaborations have been dominating the music industry, one, in particular, has become one of the biggest hits of the year. After Cardi B and Megan Thee Stallion teamed up for WAP, the track has blown up to become bigger than anyone could have imagined. In this article, CelebMix will delve into how the duo created one of the biggest hit singles of 2020.

WAP was Cardi B’s big comeback single after entering her droplet’s era with Press, South of the Border with Ed Sheeran and Camila Cabello and Please Me with Bruno Mars. After the success of her debut album Invasion of Privacy, whether you are a Cardi fan or not, there was hype to see what she would do next and can she replicate the same level of commercial success after such a strong debut era.

WAP is not your radio-friendly single, the name itself tells you that. Even with the censored version, the track is laced with sensual and explicit innuendos that cannot go unmissed. But what did you expect from two of the biggest promoters for female sexuality and owning your control with partners? While there has been much criticism of the track being ‘too sexual’, the song has become in such a short amount of time an anthem for women to take back control of how they like to be treated in the bedroom by their partners. Men have been praised for years for sexual lyrics and the same attitude should be held for women being able to express their sensual side in the same way. By both women expressing their desires in the bedroom, it showcases that they know what they want, and they want you to deliver while being with them. The track provided an attitude that many young women, should also know to have with whoever they choose to become active with. The raunchy nature of the song grabbed attention and helped aid the empowerment of many while doing so. In addition to this, Megan Thee Stallion delivered yet another iconic verse that continued to show why she is becoming one of the most in-demand new talents right now while Cardi B only added to her catalogue of brilliant singles.

One thing that Cardi B knows is how to deliver a music video. The rapper is known for having incredibly visually pleasing and controversial videos that get the public talking. I Like It, Money and Press all caused a storm upon release and WAP was no exception. The visuals that the video gave us were phenomenal and neither Cardi nor Megan held back in their performances in their solo scenes and collaborative sections. Featuring excessive animal print, bright neon colours and an array of stars such as Normani, Kylie Jenner and Rosalia, the music video was the must-see event upon release.

WAP’s controversial video and viral tweets only aided the streams on Spotify. Cardi B is already a force on the app with a tonne of songs surpassing 100 million streams and WAP is on its way to becoming yet another added to her list. With the addition of Megan on the track, and her five platinum singles so early on in her career, the collaboration was destined for success. As of today (20th August), the track has already surpassed 60 million streams and remains Number One on the Global Top 50 on Spotify with 5 million+ daily streams.

On the charts, WAP has made history by becoming the first all-female rap collaboration to debut at Number One on the Billboard Hot 100. The single also debuted with the highest single sales of 2020 and the biggest streaming week. Prior to hitting Number One the song was already certified gold and is eligible for a platinum certification in just under two weeks of being released.

With the combination of a female empowerment anthem, a ‘controversial’ music video and two of the biggest women in the industry right now, WAP was a recipe for success and gave both Cardi and Megan a record-breaking release.

For all the latest on your favourite celebrities, make sure you’re following the CelebMix account!