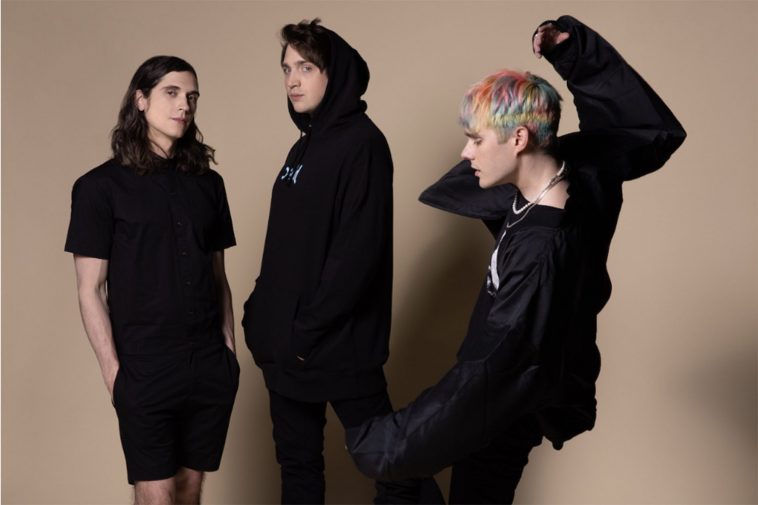 Waterparks (consiting of Awsten Knight, Geoff Wigington, and Otto Wood) announced another single and music video for one of the many songs on their upcoming album, Greatest Hits, called “Just Kidding.” The track was directed by vocalist Awsten Knight along with the band’s creative collaborator/photographer, Jawn Rocha.

For this video in particular, Awsten and Jawn made sure that Awsten’s face wasn’t clearly shown throughout the video, with lots of dark shadows helping to hide it, giving the video a dark feel to match the lyrics. Although his face wasn’t clearly soon, he was overall still visible enough fans can tell who it is. They also chose to end the video in an interesting way, with the last 20 seconds of the video having a black screen with no audio, until the video ends.

In an interview with Alternative Press, Awsten said, “This album was obviously made when I was very stuck at home, but the three songs that were made before that were done right before we left for the FANDOM Tour. It was Just Kidding,” “Secret Life,” and “Crying Over It All.”

“But the thing is, it works really f*cking well, and I made sure because I’m not going to throw songs in just for the fuck of it, but it plays so well into the dream thing because ‘Just Kidding’ is probably the most blatantly dark part of the album,” Awsten shared.

Due to COVID-19 restrictions and safety protocols, Waterparks will be playing a virtual live concert to celebrate Greatest Hits, as part of The Wiltern Livestream Series on June 4th.

You can get your tickets for the virtual concert HERE.

Watch the music video for “Just Kidding” below:

Did you enjoy the acoustic version of the “Just Kidding“?