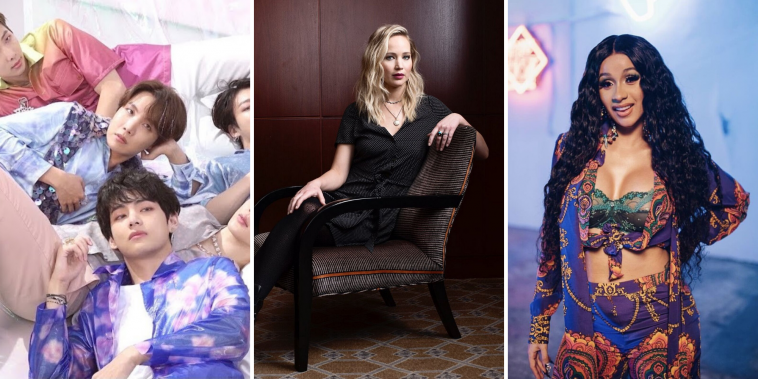 As we enter the 2020s, its worth considering what the previous decade will be remembered for in popular culture. Will it be remembered as the age when instant celebrity became accessible to anyone with a smartphone?

Perhaps it will be remembered as the age of the millennial pink-clad Instagram influencer. Maybe we will look back on the 2010s as the period when we all decided that people who recorded themselves playing video games on Twitch were worthy of mega-stardom.

While these are all great unknowns, one thing that is undeniable is that the past decade launched the careers of some of the most talented people in the history of showbusiness. As we wait to see what 2020 will bring, let’s take a look at the biggest breakout stars of the 2010s.

Jennifer Lawrence, known colloquially as J-Law, was a complete unknown at the beginning of the decade. However, her big breakthrough came in 2011 when she was cast in the leading role in the world-famous Hunger Games dystopian film franchise. Since then, the actress has gone on to hold the title of Most Googled Woman in the World, as well as scooping up an Academy Award, three Golden Globes, a BAFTA, and six People’s Choice Awards. When it comes to the creme-da-la-creme of contemporary Hollywood, J-Law sits at the very top.

Donald Glover may have been known to some people at the beginning of the 2010s, owing to his minor role in the popular TV comedy series Community. Although, it wasn’t until the middle of the decade when Glover began to really blow up, thanks in part to his own hit TV series Atlanta, which he wrote, directed, and starred in. His musical alter-ego Childish Gambino is also what really turned him into one of the decade’s biggest stars, thanks in part to his smash-hit ‘This Is America’, which earned him three Grammy Awards and spawned one of the most iconic music videos in history.

23-year-old British actress Sophie Turner spent the beginning of the decade starring in local theatre productions in the North West of England. It is unlikely she herself could have predicted the extent to which she would become a household name when she was cast as Sansa Stark in the HBO series Game of Thrones, arguably the biggest TV show ever made. Her face is well-known to millions of people, as her character appears on t-shirts, posters, book covers, video games, and even the hit Game of Thrones online slot game.

Hip hop superstar Cardi B spent the early years of the 2010s a little down on her luck, hustling as a stripper in the Bronx. It was during this time she began posting humorous videos and rap lyrics on her widely-followed Instagram account, leading to her being poached by a record label. Since then, her chart-topping hits such as ‘Bodak Yellow’ and ‘I Like It’ have gone triple-platinum, and Cardi is one of the biggest names in music. Hers was certainly the rags-to-riches story of the decade.

A round-up of 2010s pop culture would not be complete without highlighting the enormous impact of K-Pop. At the beginning of the decade, few people outside of Asia were following Korean pop bands, and hardly anyone in the US or Europe would have been able to name a band or singer. That has all changed in the past couple of years, with the so-called ‘Korean Wave’ bringing K-Pop to mainstream western audiences. It was the seven-person boyband BTS that undoubtedly led the charge, with their sold-out shows and multimillion album sales cementing their position on this list.

Finally, we have the quirky English writer and actress who managed to cap off the decade by bringing us two of the most widely loved TV shows in a generation. Fleabag and Killing Eve, the former of which Bridge starred in as well as wrote and directed, have been sweeping awards shows around the world over the past year. They may have a distinctly indie feel to them, but that hasn’t stopped Bridge from becoming a household name and even being recruited to write the next James Bond film.

So, these were out biggest breakout celebs of the 2010s. We can’t wait to see what the next decade brings in the world of celebrity!