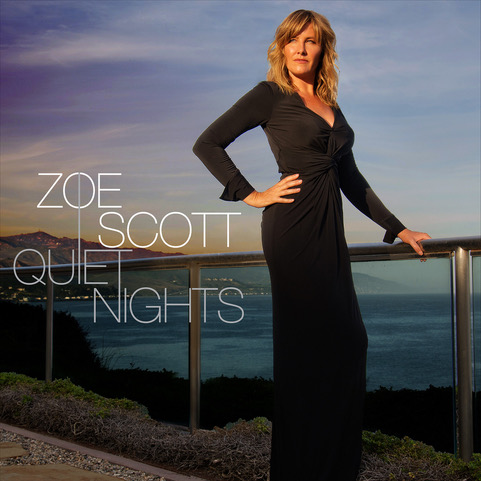 Recording artist Zoe Scott has fallen in love with the music style of Bossa Nova despite releasing Rock ‘n’ Roll music previously. 2020 hears her paying respect to not only the sound but also some of the genres biggest names in the genre including Antonio Carlos Jobim.

Her debut Bossa Nova record entitled ‘Shades Of Love’ is produced by Moogie Canazio who specialises in an all-analog recording style and really helped Scott to really understand the music and get a ‘feel’ for it. The album’s first single is ‘Quiet Nights’ which was originally written by Jobim and as Scott sings the lyrics with her textured tone.

Interestingly, Zoe Scott was fortunate enough to have Daniel Jobim (Antonio Carlos Jobim’s grandson) to play an angelic acoustic piano for the single.

The single is accompanied by a music video that was filmed in East West Studios in Los Angeles and Zoe Scott’s stunning grand house in Malibu, California. Under the direction of James Chressanthis (ASC, GSC), we open with a brief collection of clips which look like home videos and then scenes of Zoe Scott wearing at least six different glamorous and colourful outfits in a variety of locations. Whether she is walking along the beach, sitting beside an outdoor fire in the evening

The video was filmed on a RED Ranger Camera By Alternative Digital Cinema Rhonda Cam Super 8MM & Bolex Double S8MM By Pro8MM. This technology is perfect for close-ups as Scott smiles as well as wide-shots that take in the full environment around her.

The music of Bossa Nova is incredibly passionate and has been since its inception in the 1950s when the music was used to attract the opposite sex. The video features dance professionals Jose Valencia who is a dancer, choreographer and dance coach and Zuzana Lova who is a leading figure in the @SheIsPowerful organisation who teach dance to survivors of both sexual abuse and Sex Trafficking.

To summarise, ‘Quiet Nights’ is a beautifully written song filled with Scott’s soft lead vocal, sweeping melodies and skilled musicians to capture the real essence of the Bossa Nova. From a visual perspective, as the stunning Samba dancers move around the stunning Malibu backdrop it is clear that Zoe Scott had the goal of sharing the talents of both the on-screen and off-screen crews with the world in this video and she has certainly achieved that. Get ready to sit back, relax, press play and experience Bossa Nova with the gifted Zoe Scott.