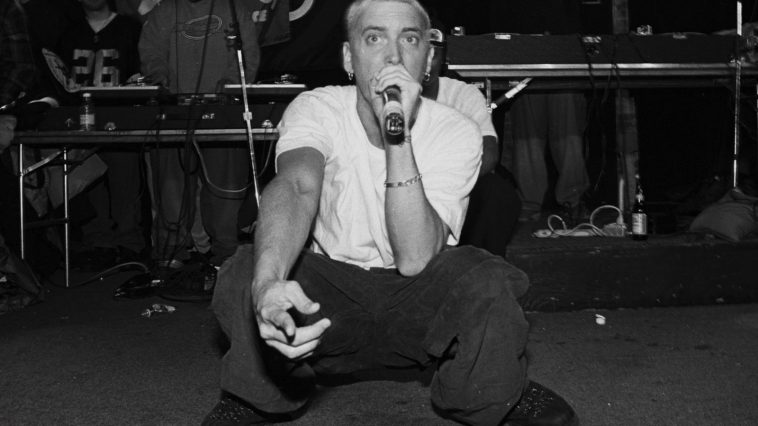 For this article, we have decided to share with you our top five favourite music videos from Eminem!

The music video for the third single from Eminem’s sixth studio album, “Relapse” (2009), this clip is an incredible visual that is an epitome of the song’s meaning and the horror film genre in general.

The video sees Eminem portraying the role of a serial killer, who escapes from rehab and kills everyone in his way. It goes without saying, this video is pretty graphic, taking reference from many classic horror movies. Expect to see plenty of dead bodies, blood and gore, as Eminem’s alter ego, Slim Shady, embarks on a killing spree. There’s even a scene of Eminem rapping in a bathtub filled with blood!

Despite the gruesome moments, it’s a clever visual that shows Eminem at his most artistic, and it goes without saying, but it’s also one of his most underrated videos too.

The video for the lead single from Eminem’s third studio album, “The Marshall Mathers LP” (2000), it’s funny, creative and almost a mockumentary on pop culture of the year 2000.

In this video, there is a multitude of places where Eminem performs the track. However, the most noteworthy location has to be in a factory, in which he raps in front of many clones of himself (hence the song’s title – “won’t the real Slim Shady please stand up?”). If that wasn’t enough, there is also celebrity cameos galore. From D12 (a former hip hop group whom Eminem was a part of), Dr Dre, Kathy Griffin and Limp Bizikit frontman Fred Durst. There’s even lookalikes of Kid Rock, Carson Daly, Pamela Anderson and Tommy Lee.

It not might be the most groundbreaking video visually, but we just love this one because of how fun it is, and all of the different celebrities and pop culture references throughout. Our favourite scene being Eminem dressing up as Britney Spears from her “…Baby One More Time” (1998) video at the Grammy awards!

This video – for the lead single off of Eminem’s fourth studio album, “The Eminem Show” (2002) – is almost in a way, a successor to “The Real Slim Shady” music video. But, done on a slightly bigger scale. It’s also perhaps one of Eminem’s most recognisable videos to the public.

First off, the video is very comic book-esque, taking inspiration in particular from DC Comic’s Batman. Eminem is joined by Dr Dre as they portray Batman and Robin on a mission to save a child who had brought a copy of “The Eminem Show” – which bears the Parental Advisory label.

Like the video for “The Real Slim Shady”, there is several celeb cameos and parodies again – models Jenna Jameson and Kiana Tom make an appearance, while Eminem dresses up as Osama Bin Laden and Elvis Presley.

It’s just like the aforementioned video – but it’s bigger, better, crazy and iconic. The comic book theme just works so well – it’s a funky concept that goes well with the nature of the song.

The video for “Darkness” – the lead single from Eminem’s most recent studio album, “Music To Be Murdered By” (2020) –  is so chilling and leaves a profound effect on anyone who watches it. It continues to give us goosebumps whenever we look back on it.

A reenactment of the 2017 Las Vegas shooting, the clip mirrors the story being told in the song’s lyrics. We see the hooded man in a hotel room, surrounding by alcohol and bullets. At the beginning of the third verse, the person removes their hood and reveals themselves to be Stephen Paddock, the Las Vegas shooter, before he then begins to shoot concert-goers from the hotel window.

The most important point of the video is toward the end. As audio clips of news reports can be heard, we see television screens broadcasting these reports, before they all fade out to morph into the flag of the United States. The following message is then shown on screens:

“When will it end? When enough people care. Register to vote at vote.gov. Make your voice heard and help change the gun laws in America.”

It just missed out on our top spot, and although it’s a fairly recent video from Eminem, there’s no doubting how important and impactful it really is.

Our number one Eminem music video would be for “Stan” (featuring Dido), the third single taken from “The Marshall Mathers LP”.

The reason why we love this video so much is that it plays out the story being told in the song, from start to finish. Stan is literally shown in the video to be such a huge Eminem fan – he has his posters all over his walls and even dyes his hair blonde.

After the letters he writes to Eminem do not reach him in a timely manner, Stan has had enough and then uses a tape recorder to record himself driving – while his pregnant girlfriend is tied up in the trunk. He then realises he has no idea how he will be able to get the tape to Eminem, as he drives his car off a bridge.

We have to applaud Eminem for portraying the themes of the song so well with the video – it’s not very often an artist does that. It’s a fascinating yet thrilling watch into the concept of an obsessive fan.

What is your favourite Eminem music video? Let us know over on Twitter @CelebMix!