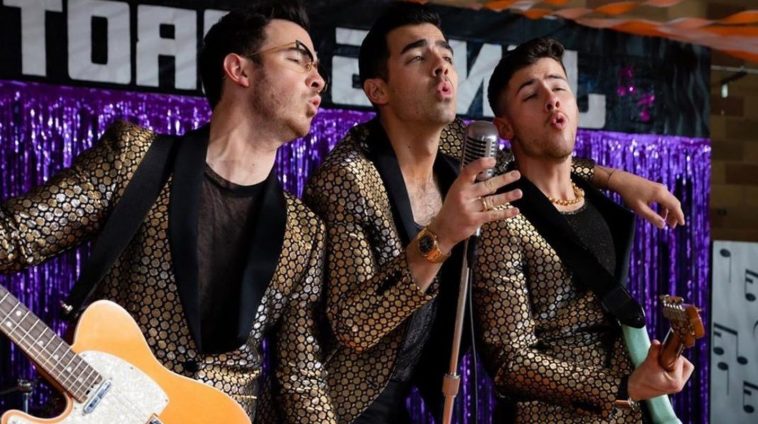 This week marks CelebMix’s fifth birthday so we’ve decided to celebrate by dedicating articles to some of our favourite celebrities. This one is all about the Jonas Brothers and their music videos!

From getting suited and booted to recreating famous movie scenes, over the years Joe, and Kevin have treated us to countless music videos which are simply iconic. Here are five of our all time favourite JoBros visuals.

Directed by Brendan Malloy and Tim Wheeler, the music video for ‘Burnin’ Up’ is just as phenomenal today. The video sees Kevin, Nick and Joe reading the script for a potential video shoot and we get to see them take on the roles of action stars who need to save the day (and the girls). This video has it all: Joe with a face ‘stache, Nick channeling his inner 007, Kevin becoming a kung fu king, a cameo from Selena Gomez AND a hell of a lot of the legendary Big Rob.

The music video for ‘Lovebug’ takes us back in time, as we follow the love story of a young woman and a sailor who is preparing to deploy to war. The brothers play numerous characters throughout the visual, including the house band. We love the vintage feel to the visual, which perfectly matches the timeless vibe of the song. This is a classic JoBros video which will always be a favourite of ours.

An underrated JoBros song AND video, the genius visual for ‘Paranoid’ was once again directed by Brendan Malloy and Tim Wheeler. We love that each member has their own bizarre moment in this visual, from Joe finding himself in the ring with two angry wrestlers to Nick being stranded in a desert with nothing but a moving car and a random girl for company. Our highlight is Kevin and his multiple clones though, because who wouldn’t want a dozen Kevin Jonas’ in their lives?

As comeback videos (and singles) go, ‘Sucker’ will always be a first class serve. Joined by their wives, the visual for ‘Sucker’ is an absolute riot, with the gang causing chaos in a country manor. From outdoor baths to Joe getting tied up, extravagant costumes to the most lavish dinner party, we definitely got the FOMO when watching the ‘Sucker’ video – where was our invite guys?

‘What A Man Gotta Do’

When it comes to involving the Jonas wives, we didn’t think that Joe, Nick and Kevin could top the visual for ‘Sucker’. However, ‘What A Man Gotta Do’ takes things to the next level. Recreating some of the most famous scenes in movie history, every second of this video is sensational. Nick recreates the famous dance scene from Risky Business for his wife Priyanka, although later on she shows him how it’s really done, whilst Kevin and Danielle pay homage to Say Anything…as he holds a boombox underneath her bedroom window. Joe and Sophie also recreate the dance competition from Grease and it’s safe to say that they were born to hand jive baby. We will never not be obsessed with this!