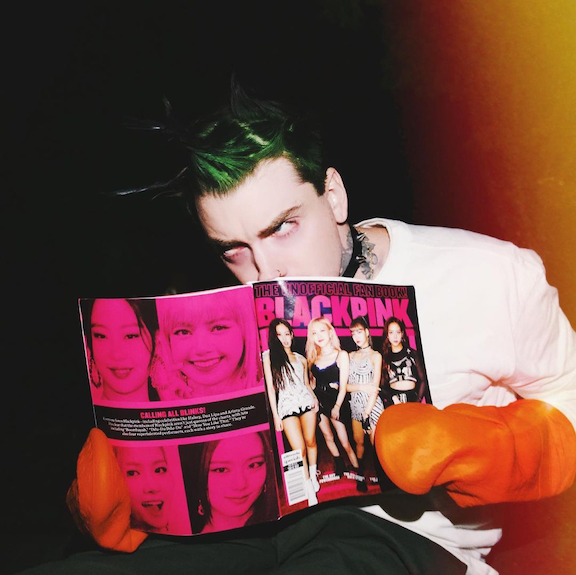 93FEETOFSMOKE is an artist known for his hardcore meets pop-punk reminiscent sound with underlying notes of industrial trap rock and booming bass. His newly released single “FEEL SOMETHING AT ALL” discusses the modern urge for constant entertainment and pursuing sources of fixation, both good and bad, in order to alter his current state of reality. Co-written by Underoath’s Aaron Gillespie, the lyrics speak volumes to the modern generation in flux with emotional peaks and valleys and in constant search of something more.

“FEEL SOMETHING AT ALL” creates contrast with the soft reverberations of guitar and melancholy vocals that open the track and the electric, layered chorus paired with 93FEETOFSMOKE’s bombastic belts at the center of the song. The lyrics are extreme, focused on the polarizing nature of emotions and the substances and circumstances that alter them. 93FEETOFSMOKE expresses, “I’m obsessed with the mess, yeah there’s beauty in the stress. Build it up, burn it down, watch it settle on the ground.” Profoundly poignant, “FEEL SOMETHING AT ALL” describes the universal chase for something new and exciting that often manifests in plunging burnout and dissatisfaction.

“FEEL SOMETHING AT ALL” is the first single from 93FEETOFSMOKE’s upcoming album SUCKER. In the past, he has worked with a repertoire of musicians including phem, guardin, Tosh the Drummer, and Kamiyada+ and has toured with girlfriends (Belmont and Travis Mills). He’s been making music since 2015 and has an impressive fanbase, reaching more than 100M streams across platforms.

Check out “FEEL SOMETHING AT ALL” and tweet @celebmix