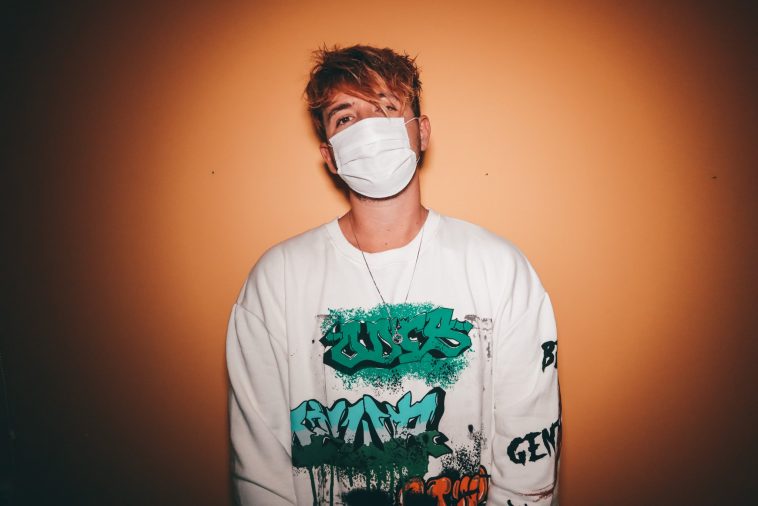 A few months ago, we spoke to Dean Lemon about his exciting venture – The Social Lemon – an exciting social media agency which helps artists reach their full potential. When we spoke to Dean in that interview, he teased us all about afterboy’s upcoming EP ‘Bad Dreams’, he also promised us a catch up, and to hear all the low down on the new EP. A man of his word, after boy’s found the time in between playing epic livestream shows, writing and launching new music, and being a ‘Social Lemon’ to catch up and give us all the low down on Bad Dreams.

Hi afterboy! Welcome to CelebMix, and congratulations on your 2nd EP Bad Dreams. We’re hooked on it!

So because this is your official CelebMix debut (although, we’ve worked together under other projects for years) can you introduce yourselves to us?

Of course – my name’s afterboy! I’m an alternative hip-hop/rock/whatever you wanna call it musician from London, UK. Basically I just create music that is based off of emotions and feelings that I’m feeling at the time. Sometimes it comes out like a rock song, sometimes a pop song or sometimes a rap song. Just depends on the vibe! Either way it’s fun.

We know you as a musician find inspiration from so many different artists, but who inspires afterboys’ sound?

I think the main inspiration for me is Juice WRLD. I’ve been listening to him for years and he kinda always inspired me and got me writing songs. I just loved the lyrics and the vibe and also the rock element he added in certain songs. He always added a rock element to all his songs, whether it was at a live show or just on an album and that was just awesome. But other inspirations for me are XXXTentacion, Machine Gun Kelly, Iann Dior, Taking Back Sunday, Bring Me The Horizon, Good Charlotte & more! I like combining all my influences and seeing what happens haha

So, this is your second EP ‘Bad Dreams’, what has been the writing process been for this EP?

To be honest, I wrote these songs like a year ago, I was just sitting on them for ages but the writing process was pretty much a really cool progression, which I think you can hear, from my first ep (Mixed Emotions). The music is better, the song writing is better and the vocal performance is better. So that’s what I’m really proud of the most I think. The actual writing of the songs was cool, again because it was like a progression for me from the first EP, I was just writing better songs and kinda feeling myself a little bit. Then as I wrote bad dreams, which is the title track, I released it as a single and it got Spotify editorial support so I was just pumped to release the whole thing and it kinda gave me the confidence to maybe revisit a couple songs and get them recorded and released.

‘666 missed calls’ – is a softer song for afterboy, did you enjoy reaching into the emotional side?

This is actually my favourite song I think. I’m super proud of it. For me it feels great singing this one and has a pretty cool meaning behind it, where for me, it’s kinda like you’re beating all your demons and ignoring all the temptations from whatever may be getting to you – whether it’s drugs, alcohol, or an old partner or just something random like a chocolate bar. It’s like the devil keeps calling me but I won’t answer. That’s literally temptation or the devil or whatever trying to tempt you into doing something and you’re not giving in. You’re fighting it and you’re winning. So yeah it feels good that one I love it. I think it’s cool because it’s kinda empowering and the listener can relate to it.

‘Bad Dreams’ the title track of the album, what made you pick this as the lead?

I picked this as a lead because this song kinda made me feel like I finally figured out who I am. I’m afterboy. I wrote this song and instantly was like THIS is afterboy. It’s the song I can’t wait to perform live and is definitely the song I would show people if they asked who afterboy is or what type of music afterboy releases.

Our favourite track is ‘I don’t need u’, we love how its mixed afterboy’s rap/ hiphop genre and mixed it with your roots of rock. Was that fun mixing your two sides?

Hell yeah! This song was awesome to do. I actually wrote it back in February 2020 as a way of dealing with some unresolved feelings towards a situation and man did it feel good. It was super fun for me, because like this track is inspired by actual meaning, as all my songs are, but this one felt so good because I was feeling so angry and upset about a situation and it just helped me move on and get on with my life. I think the main inspirations for this one were XXXTentacion and Bring Me The Horizon, which I think is pretty apparent when you listen to it

‘You saved me’ is the song we feel is going to be the anthem for afterboy live shows – are you looking forward to taking afterboy out on the road?

You know what, I just did a livestream performance at a cool studio called White Noise Studio, where we had an awesome light show and a full set up and it was by far the best thing I’ve done in years. It made me miss live shows so much. I honestly think getting out on tour to perform live is gonna be a dream come true for me. Touring is the best thing ever as a musician, so with this whole afterboy era, it’s just gonna be a different level. I can’t wait

‘Im Sorry’ – the EP closer is another heartfelt smash! How has the reception been for this song, and the rest of the EP?

It’s been good!! The reaction has been great across Europe and US. Loads of positive comments and messages, lots of people taking notice, so that’s super cool. My main thing is, I just love creating music. I’m not doing any of this for money or for any like fame or acceptance or anything like that. I’m just doing it because I love doing it, and I think that’s what’s making this whole thing do so well and move so quickly. I love it. I love music and I can’t wait to keep moving and moving. I’ve got so much planned already and it’s only gonna get better and better from here!

We can’t wait to keep watching and celebrating with afterboy, joining him on his journey!

You can catch the highlights of afterboy’s insane set performed at Face Down London here.

Here’s our favourite song of the night.

Bad Dreams is available now to download and stream on iTunes and Spotify.