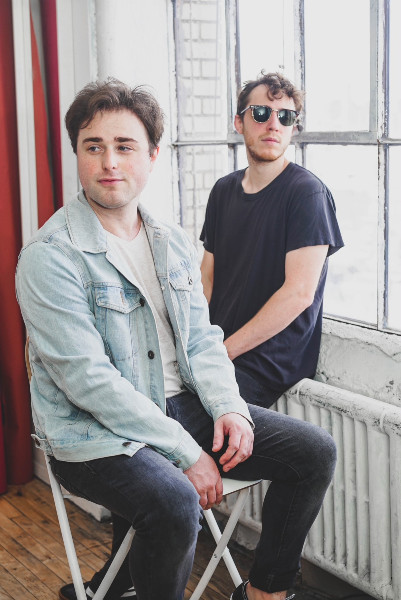 Made up of Skip Glogan (producer, writer, vocals) and Derek Broomhead (drums), Almost July has performed at the Mercury Lounge, Rockwood Music Hall, and The Delancey. Well-known for their impressive live shows, which have Skip encircled by instruments, electronics, and samplers, the band delivers delicious musical concoctions out of what appears to be magic.

Almost July’s previous singles include “Hearts,” “Young,” “Make Mistakes,” “Alone,” “Faded,” and “Even If It’s Wrong,” which collectively amassed over 680,000 streams on Spotify. Over the course of releases, the band’s sound has evolved from creamy dream-pop textures to more vibrant electro-pop colors with glossy leitmotifs.

“not ur type” opens on emerging tones rolling into shimmering, percolating synths riding a low-slung, syncopated rhythm. Glogan’s smooth, velvety voice imbues the lyrics with luscious, indulgent timbres, at once wistful and yearning.

Iridescent breakdowns shift the harmonic flow, and then mousse up to gleaming washes of sound, gliding, rippling, and effervescing with trembling misty hues. Plush, glowing vocal harmonies give the tune depth and dimension, adding silky accents that highlight the cashmere tones of Glogan’s alluring vocals.

“not ur type displays” not only Almost July’s rich sonic evolution but Glogan’s expanding talent as a songwriter, arranger, and producer.

Almost July has it going on! “not ur type” drips with glittering filaments intertwining into lustrous, irresistible music.