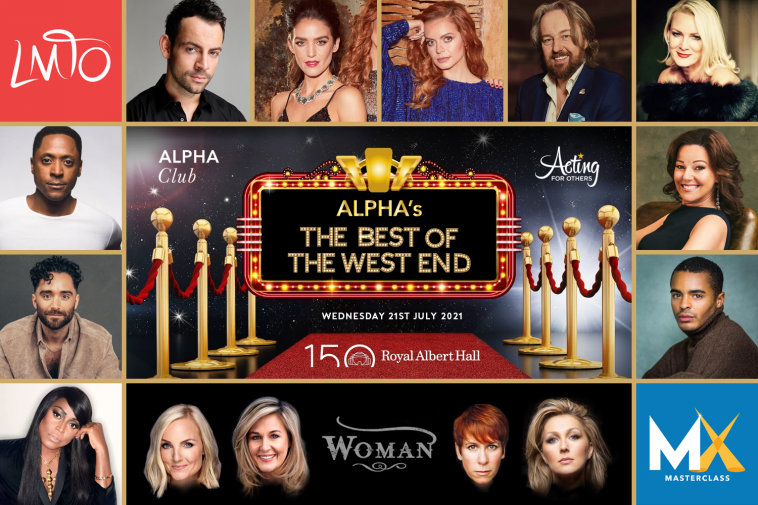 Celebrating musical theatre and freedom week in style, Alpha’s third ‘The Best of the West End’ event will take place at the Royal Albert Hall next week. The star-studded charity concert promises to be the musical spectacular of the year!

The show, which is in aid of Acting For Others, will commence at 7:30pm on the 21st July 2021. As well as being a huge part of the Royal Albert Hall’s 150th anniversary season, it will also be the first West End production on the opening week of the iconic venue.

Speaking about the upcoming concert, West End superstar Ben Forster said: “I am so honoured to be appointed Creative Director for Alpha’s Best of the West End annual concert at the iconic Royal Albert Hall. This is no ordinary concert and I am so excited to be part of the team creating what will be the most spectacular event, all in aid of a charity so close to my heart, Acting for Others.”

Dame Judi Dench, president of Acting for Others, said: “We are incredibly grateful to be the chosen charity for Alpha’s The Best Of The West End at the Royal Albert Hall. Thank you to the wonderful creative team, Alpha Solutions and this spectacular cast. We hope you enjoy this special event and can join us in celebrating the reopening of this iconic venue in its 150th year.“

Tickets for this year’s ‘The Best of the West End’ event are currently on sale here on the Royal Albert Hall’s official website. A minimum of £5 from every ticket sold, together with all profits made, will be donated to Acting for Others. It’s going to be a fantastic night for a fantastic cause.

Over the years, Alpha Solutions have hosted an extraordinary amount of phenomenal events. We were in attendance at last year’s ‘The Best of the West End’ concert, which took place shortly before lockdown, and it was a truly special night. CelebMix favourite Ben Haenow’s faultless performance of ‘I Want It All‘ was a personal highlight of ours.

As event restrictions begin to lift in the UK, we can be sure that Alpha will be hosting many more unforgettable nights of entertainment. Attending ‘The Best of the West End’ is, without a doubt, a perfect way to celebrate freedom week and the return of live music. Make sure you don’t miss out.

Will you be attending Alpha’s ‘The Best of the West End’ concert? Whose performances are you looking forward to most? Let us know on Twitter @CelebMix!