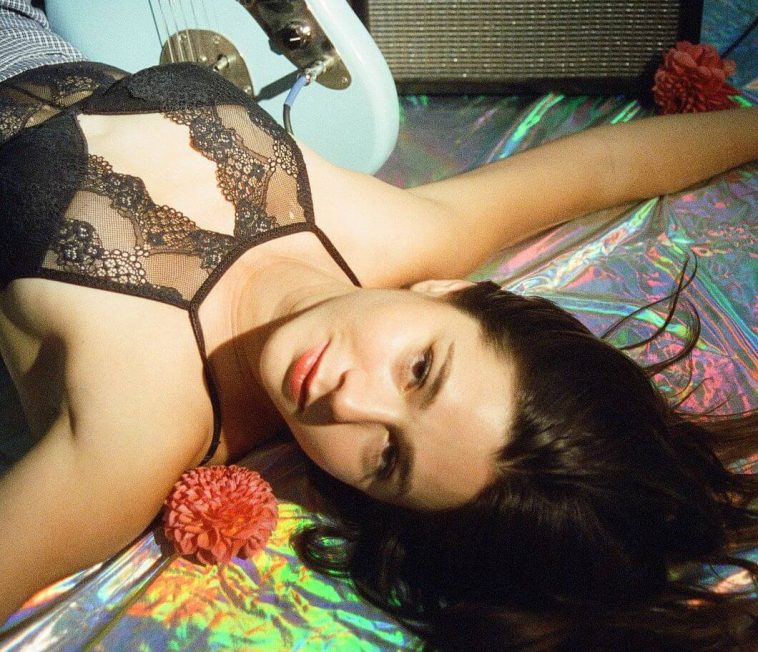 We all need to heal after a breakup and Anie Delgado helps you to do just that with the release of her debut EP “You Ruined Forever”. This six-track collection really encompasses the feelings Anie Delgado went through after her breakup while also being hyper-aware that she didn’t get closure from the whole thing – do we ever really get closure after a breakup? This follows up her single “Jekyll & Hyde” which acted as the fourth single from this EP.

Anie Delgado, real name Stephanie Delgado, is a Cuban-American singer-songwriter who was born in Miami, Florida, grew up in Melbourne, FL, but is now living in Los Angeles. Her interest in music started at a young age, receiving her first guitar in fourth grade, growing up with music in the Cuban-heritage household and being surrounded by Cuban music in the Florida Keys, which all led to her studying in New York City at The American Musical and Dramatic Academy. Whilst in New York, she joined an experimental rock band and performed at a variety of venues before deciding that she wanted to pursue a solo career, so she headed to Los Angeles in 2018, exploding on the alternative-pop music scene. Her debut single, “Galaxy”, was dropped in July 2019 and many more singles followed including “Dancing While the World is on Fire”, in 2021, which has become her most-streamed Spotify single with over 200,000 streams to date, closely followed by the follow-up single “Cloud9” which has over 150,000 streams. With the release of her debut EP, “You Ruined Forever”, Anie Delgado will continually rise as an alt-pop singer-songwriter and, with her incredible voice and lyrics, we’re excited to see where her career takes her.

Talking about the EP, Anie Delgado said: “The EP is called ‘You Ruined Forever’ because when I broke up with this person, they shifted the narrative and made me the villain even though I left the relationship because it wasn’t healthy, due to infidelity and personal growth that was needed on his part.”

She continues, “Although the EP has a lot of tones of resentment and nostalgia and clinging to the past, the journey of the EP is that these relationships are what make us. I felt the need to release this project because this relationship shaped my 20s and who I am as a person.”

Stream “You Ruined Forever” by Anie Delgado on Spotify here:

With emotional heart-hitting vocals, Anie Delgado knows exactly how to send chills to her listeners. Tapping into her internal feelings and creating a relatable narrative, “You Ruined Me” is a strong and personal self-reflection about the breakup she’s been through. “Jekyll & Hyde” starts the EP off, introducing herself to us with gorgeous vocals and a soft pop ballad. The second track, “Indie Bands + Cigarettes”, has a more indie-pop-rock sound with an acoustic guitar chord running in the backing track, while Anie Delgado brings an emotional hook hitting high notes and an addicting rhythmic chorus.

The title track, “You Ruined Forever”, follows next which completely showcases Anie Delgado as both an accomplished singer and a brilliant songwriter, her vocals are off the chart with an unstoppable falsetto paired with an impassioned chorus that will have you singing along with meaning on the very last repetition. “Narcissist” is the fourth track of the EP, seeing Anie Delgado dive right into commercial pop which fits her voice amazingly, the hook sees her unlock her falsetto whilst the chorus hits back at the person who she broke up with, all wrapped around an upbeat tempo and a groovy rhythm. The fifth track, “Broken China”, tones it back down allowing Anie Delgado’s vocals to fully shine as she sings about finding it difficult to let go of the time she spent in the relationship. The final song on the EP is “No Other Way”, which takes us back to Anie Delgado’s alternative pop sound with hints of indie rock sprinkled in; it’s a statement of an ending as she decides she needs to heal after the breakup and that’s exactly what she’s going to do – it’s hypnotic and unforgettable, and the perfect ending to the EP.

Overall, this EP really is music therapy for people who have just been through a breakup and need to heal but to also hit out at the person that hurt them. It’s an awesome collection of songs that really allows Anie Delgado to shine completely. As a debut EP, “You Ruined Forever” is iconic and unforgettable, her versatility within the alt-pop genre is diverse and fully allows Anie Delgado to make her mark in the music industry. Her future is beyond bright and we’re excited to see where it takes her.

“You Ruined Forever”, the debut EP by Anie Delgado, is available to download and stream, across all platforms, right now.

Let us know what you make of “You Ruined Forever” by Anie Delgado on Twitter @CelebMix.